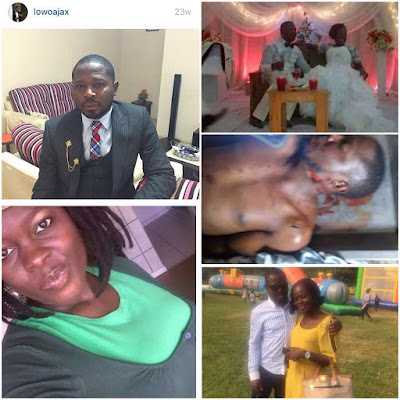 A Nigerian lawyer, Mrs. Yewande Oyediran who stabbed her husband, Mr. Lowo Oyediran Ajanaku to death on Tuesday February 2, 2016 in their matrimonial home was arraigned on Friday before Ibadan Chief Magistrate Court, Iyaganku.

The prosecuting police officer, Inspector Amos Adewale, preferred one-count charge of murder against the suspect.
She pleaded not guilty.

The charge against Yewande was that on February 2, 2016 at about 06:10am at No 30 Abidi Odan Akobo area, Ibadan in the Ibadan Magisterial District she did unlawfully cause the death of one Oyelowo Oyediran Ajanaku, 38, by stabbing him with a knife on the neck, which later resulted in his
death.

Adewale said that the accused person had committed an offence contrary to Section 316 and punishable under Section 319 of the Criminal Code Cap 38 Vol. II Laws of Oyo State of Nigeria 2000.

The presiding Chief Magistrate, Mrs. Kehinde Durosaro-Tijani,who adjourned the case to 16 February 2016 for mention and ordered the accused to be remanded in Agodi Prisons.

The defence counsel, Mr. Seun Abimbola, had asked the court to allow the suspect be remanded in police custody so as to be able to reduce the truamatisation she has been going through as a result of the incident. The request was turned down.

Abimbola pressed further that he would bring a written application for the request to the court. But the court said it did not have jurisdiction to entertain such application based on the nature of the case.

However, the journalists who have been well positioned at the Black Maria to be used in conveying the suspect to Agodi Prison to take her picture were disappointed as the suspect was smuggled out of the court in a blue Primera Nissan Car purportedly owned by a lawyer.

A legal practitioner, Mr. Sina Olaniyan, described the accused as someone who has a high regards for due process of the law and of good character, adding, “But this is a test for the judiciary. It is going to be a test for the Nigerian Bar Association (NBA) as a whole. The members of the public are watching to see where the pendulum of justice will swing. She is still presumed innocent until she is proved otherwise”.

Any killer herdsmen caught with illegal arms should be tried -Presidency

PMNews reports that another legal practitioner, Mr. Adeleke Bakare, described Yewande as a very amiable and gentle person, and a dedicated person to her job, saying,

“She is somebody who fights against crime and she is always here, doing her job as a prosecutor, diligently. The person I have known that always discourages crime has now been involved in an alleged crime and it is a crime we can describe as of highest magnitude, which has highest punishment known to the law. Honestly, I am surprised”.