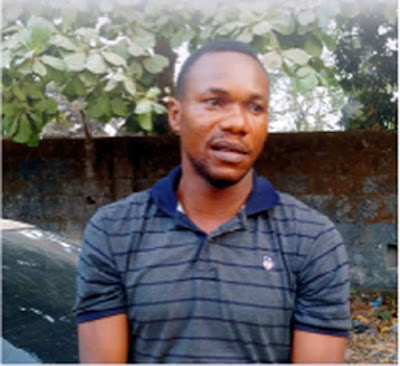 Notorious member of the dreaded armed
robbery gang that recently terrorised banks through the creeks and
waterways of Lagos, Clement Abanara Million, has said that it was the
chieftaincy title he took in his locality that led him to armed robbery.
The 42-year-old suspect who assumed the
title of ‘Ebimewe’, meaning ‘someone doing well’, made the disclosure in
an interview with the Nation a few days after his arrest by operatives of the
Inspector-General of Police Special Intelligence Response Team.
He said

“My real names are Clement
Abanara Millions. I am from Ogbembri Village, Warri North, Delta State. I
was one of the militants granted amnesty when we dropped our guns. The
Federal Government used to pay us N65, 000
each every month.
“I was also doing black oil and gas
business, and I was making good money from it. I started helping people
with the money I was making. I built a good mansion and became a
philanthropist. I also built a jetty for my people but could not build a
school because it is an expensive project.
“In the year 2014, I accepted a high
chieftaincy title called Ebimewe, but the high financial demands of my
new title made me to join a bank armed robbery gang to get enough money
to meet up.”

Explaining how much it cost him to build
a first–class country home, Clement said:

“It is difficult to calculate
easily and tell you how much it cost me to build the edifice. When I
was building it, the only thing I knew was that I used to buy cement by
trailer load. I did not want the builder to manage cement or rods or
concrete. If you fire bullet at the wall, it cannot penetrate. It would
be like firing bullet at an iron wall.
“The cost was a millions, but I can’t
give you the exact cost because what I was doing was that I had a taste
of what I wanted and I was supplying what the builders needed. The money
was too much. I used to add money to the building of the house after
each operation or from for the money I made from black oil. The N65,
000, which the government paid me through the Central Bank every month,
is small money compared to the money I was spending as a chieftaincy
titleholder.”

Apart from other houses he built,
Clement noted that the cost of the mansion could cover the cost of many
mansions. He said:

“I don’t know how much it cost me to build this
mansion because my target was to build it to my taste and not how much
it would cost me.”

On how he joined gangs involved in bank
robberies and kidnapping, he said:

”There were two generals or leaders
called Kelly and Kakadu, and we had two camps namely Dike and Ossy
camps. Kakadu was more powerful than Kelly. There was no armed robbery
operation or kidnapping work we would do without involving Kakadu. Even
where he was not able to follow, he would send some of his experienced
boys who have mastery of the gun, the creeks and contacts, especially
contacts that would inform the gang when there was enough money in the
bank vaults or a workable plan for a successful bank operation.
“It was my mother that gave me the name
Million, and that was the name my gang members and the majority of
people who know me preferred to call me. I participated in four bank
robbery operations out of seven, led by Kakadu and Kelly. We also had
Dike and Ossy camps. There was a member we called John Togo. He was
among the militants that dropped guns and were granted amnesty.

“We were doing well in black oil
business. One day, John Togo begged me to loan him N300, 000 to buy
something in Lagos, not knowing that they went to plan how to attack and
rob banks in Lagos. I could not say no to him for security reasons.

“I participated in a bank robbery at
Ikorodu and the second operation at the same Ikorodu. (And) FESTAC,
Agbara and Lekki bank robbery operations. We got about N66 million in
Agbara bank robbery and N23 million in FESTAC operation; my share was
N800, 000. We operated with 13 guns in the FESTAC operation and we were
about 26 in number. My Agbara share was N2.5 million.
“We used two buses in the FESTAC
operation. In the Ikorodu  operation, I got N500, 000 out of N12
million  and in the second operation at Ikorodu, I got N800, 000 out of
N62 million.”
On why he first relocated to Cotonou,
Clement said: “Cotonou is the safest place for any wanted criminal to
hide because it is like a no man’s land where nobody cares to know who
you are or why you are there. See, you cannot compare Ondo State with
Delta State and other oil states.  Ondo is a small oil state. Our
farmlands have been destroyed, including water and fish. Even the NDDC,
NYC, among others are trying, but (it is) not enough.

“There was a time the gang was killing
policemen and that made me to think of resigning from armed robbery and
kidnapping work. I knew the police would be after us anytime they lose
one or more of their men or when innocent citizens are shot dead in an
armed robbery operation.

“I even went to church, confessed my
sins and vowed not to go back to armed robbery work, but these our gang
members, our leaders, would come with one reason or the other and make
us to go for another operation. I also needed more money as a high
chief. I was not robbing banks till last year despite my 20-year
experience in armed robbery. It was because of fuel business that I came
to Lagos. I used to bring some jerry cans, and each jerry can is loaded
for N1, 000.
“After the Ikorodu bank robbery, I came
back and followed them to rob a bank in FESTAC because of ‘long throat’
(greed). I returned to Ikorodu to participate in another bank robbery
because my 500 jerry cans caught fire. I had one Highlander jeep, which I
sold for N800, 000. I bought three sawing machines. I relocated to
Benin to be able to monitor my sawmill workers.
“They called me again to come to Lagos
and I told them that I would not come, and I threw away my two SIM
cards, GLO and Etisalat. I like Etisalat because of the economy of the
calls. Etisalat used to give N1,000 bonus.”

On who set the dynamite used to blow up
the vault and bank door, Clement said:

”Anytime there was nobody to
drive our operational vehicle to the robbery scene, I would drive. I was
the one that packed money from the vault in Agbara.
“I operated with AK-47. There was law in
the camp. We were the strangers; they (gang leaders) operated GPMG.  We
operated only AK-47. I am older than Ossy in age, but he is a general. I
have 20 years experience in armed robbery and kidnapping. In our gang,
we have people or members that are Hausa, Yoruba, Igbo boys. Dennis is
an Igbo boy. He used to wear army and police uniform to beat security on
our way  to operations and back.

“I am married with six children. My wife
is not aware that I am an armed robber. When she told me that some
people told her that they saw my name in the newspapers, I said to her I
was not the only person bearing the name Clement or Million. When I was
arrested, she said if she had realised that I was a robber, she would
not have led police to where I was hiding in my apartment in Benin.

Confirming that she was not aware that
her husband was a robber, Clement’s wife said:

“We married in 1999 and
we have five children. When I told him that I saw his name in the
newspapers, he said; ‘I am tired. I want to rest. Is it only me that
answers Million? I wanted to do business with the people you were
seeing’. He also bought a car (RAV4) and he went into hiding. I sold it
to feed my children because I had no money after he left.

Establishing the fact that armed robbers
attacked him and his family, Million said:

“When I heard the robbers
shouting to my wife, ‘where is your husband? Bring out the money you
have!’ I tried to escape. But when I was escaping, one of the members of
the gang asked me ‘where are you going?’ I told him ‘don’t worry’, and
he could not fire me thinking I was one of them because they were many.”

On how many people he had killed,
Clement said:

“If not by mistake, I will not kill somebody. I went for
training as a militant. I was taught how to shoot. I don’t shoot
carelessly. If I see the police, I shot into the air. It is other
members of the gang that shoot the police.”

But why do they set one of their
operational cars ablaze after each bank robbery operation? Clement had
an answer.

“We do it to conceal the identity of the owner who is our
gang member, and we used to compensate the owner when sharing bank
money. I had vowed in my  New Year resolution that I would stop robbing
people, but, unfortunately, I was arrested.”