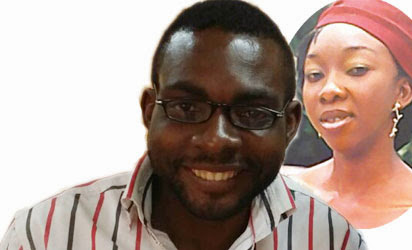 The fiancé of late 29-year old
nurse who died of Ebola, Dennis Akagba has just granted a new interview to Vanguard.
He revealed  how Justina started work at First
Consultant hospital, and how
being pregnant made her easily contract the virus despite working at the
hospital for just one day.
He also spoke about how he tested positive
and how God healed him. He also opened up on how he survived and his last moments with her…..his narration will nearly (if not) make you cry 🙁

I was reading a book on healing
and taking of the Holy Communion. So I learnt to take Holy Communion morning,
afternoon and night. I also engaged myself in feet-washing every day before
going to bed. The Almighty God saved me; the Holy Spirit healed me. It wasn’t
as though l didn’t fall sick as l had direct contact with Justina but the
Almighty God healed me. When I was discharged, I got to my house on Saturday
evening and spent two hours the next day, Sunday, thanking God on my own. I
didn’t go to church or anywhere because of the already established stigma but
today I can confidently attend church activities because I guess they all know
I’m free now. I know my faith and belief healed me. God also worked for me
apart from the fact that my immune system is also working. I believe I got
healed also because friends prayed for me.

Meet the two unemployed Nigerian graduates that have vowed to shut down the Internet till they get a JOB!
Nollywood actor accuses girlfriend of Ebola, throws MMA into panic
To Top