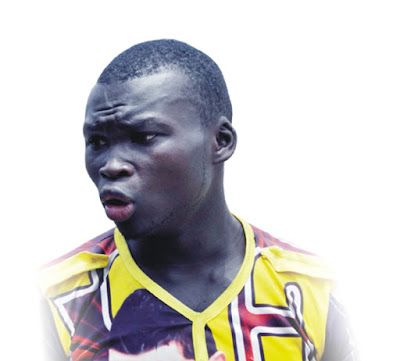 Femi Ola’s name came up as one of the
workers that were killed at the collapsed building at Lekki Gardens Estate, in Lagos State on
Tuesday.
Words had gone round to his family
members that his remains had been carried away in nylon bags and
deposited in a morgue. This, it was learnt, threw the family into a
mourning mood and made sympathisers to throng their homes to mourn with
the family.
Before they could conclude plans to
recover his remains for burial, Femi emerged and caused pandemonium in
the house. “A ghost had appeared,”  they thought as they scampered for
safety.  Contrary to their fears, Femi didn’t die in the incident.
Femi who earned the title of kokumo
(Yoruba word for somebody that cheated death) narrated to the Nation how he survived
thus:

” I was working as a pay loader  before the building collapsed. I
always slept in the building with others. When the incident happened,
they thought that I was one of the dead victims. They had even sent
message to my family that they saw my remains being taken away in nylon
bags.  My mother on hearing the sad news came in the company of my
sister to the scene and started crying.

“I was not around all along as I had
gone to work in another place. A friend invited me to go to another site
with him before the incident happened. If not for the friend that took
me out to another site, I would really have died in the building
collapse because that was where I  used to sleep.
“I thank God for preserving my life. I
would go to church and give thanks to him. I was thought to have died
but the Lord miraculously saved me.”

The food vendor of the victims, who
simply identified herself as Iya Segun, was melancholic when The Nation
encountered her. She told our correspondent that she had been selling
food to the victims for the past three years when the construction work
started, adding that their images have been haunting her since the
incident occurred.

“The victims and I were together before
we closed for the day on Monday.  I came back on Tuesday hoping to meet
and do business with them as we had always done. But to my dismay, it
was the gory sight of the dead bodies of the people that I spent the
previous day with that confronted me.
“ I have been in deep shock since the
incident occurred as their images have kept flashing through my mind.
When I went out to urinate at about 2am on Wednesday, I had to run back
to my room because I had a flash back of their images. It is impossible
for such thought not to cross one’s mind because we had stayed together
for several years.”

The victims include Sunday, one of the
most hardworking carpenters on the site. He was a native of Abeokuta in
Ogun State. He was married and had three children before his untimely
death.  Tunde, an iron bender who also died in the incident, was equally
married with two children. He was from Ibadan. His colleague, Kazeem,
was from Ife. He wasn’t married before his death.”

Seun, an artisan who slept in a high
rise building beside the collapsed building, also suffers the same
psychological trauma with the food vendor. Narrating  the mood of
workers on the site after the incident, he said:

“ We were sleeping in
another building beside the collapsed building when we suddenly heard a
deafening sound. Immediately we heard the sound, we all rushed out.
Surprisingly, we saw that it was the building where our colleagues slept
that caved in.
“We quickly moved in to rescue the
victims. We succeeded in rescuing  three people and brought out one that
had died before rescue operators arrived. Shortly after that, I left
the environment because the images of my dead colleagues kept bombarding
my heart and imagination. It wasn’t a good experience to see one’s
colleagues who were hustling to make both ends meet  mangled in that
manner.”

Bidemi, an artisan at the site, alleged
that the contractors made life unbearable for them by not paying them
their wages for a very long time before the incident occurred.

“ They have been owing us for about a
month now. They used to pay us on a weekly basis but for the past four
weeks, they have not paid us. This obviously weakened our morale as we
could hardly feed and meet the needs of our family members and
dependants.
“ This was why the wife of a dead victim
brought her child to meet him when he was not sending money to them.
This is very painful and regrettable. It shows how callous the regular
employers are.”

Mr. Christine Ahisu, a resident of a
nearby community in the area, shared his experience of the incident
thus:

“I witnessed the disaster since it happened close to my place of
residence. The actual number of people who died is more than those being
reported.  As at today (Thursday), dead bodies are still being
evacuated from the site.

“The disaster occurred as a result of
the thunderstorm which happened on Tuesday morning.  Some of the workers
were still staying in the building because the company owed them some
money. It is only about 10 of them who survived and there are about 50
of them dead.  This is because the building actually sank, not collapse
as was widely reported. That is why some people  underground were still
making calls for rescue but we are fearing they are now dead, since they
have stopped making calls. They were supposed to erect a three-storey
building but the owner added two.

“The  land  in question was sand-filled
three months ago and they are  laying irons on it almost immediately.
There is another building adjacent the place where the same Lekki Garden
is building, and they recently sand-filled the place too. Why are they
sand-filling a riverine area? They are just reclaiming and sand-filling
the  whole place.

Florence, an aggrieved resident of the area, argued that the incident was caused by the use of substandard building materials.

“This is not the first time that a
building Lekki Graden’s estate would collapse.  About two years ago, one
of their buildings collapsed at Abraham Adesanya Estate. Now, this one
has happened. When I saw them refilling the sea shore, I said these
people were not equipped for this because they didn’t take time to do
the job. They were very much in a hurry to build the estate. If you
check the ground floor, there are so many cracks. Look at the fences of
the building and see what has become of it,” she said.

Mr Olumide, a security officer in an
adjoining building, told The Nation that a good number of the victims
were his friends, regretting that a number of them died labouring in
vain.

“If you were here when they were
bringing out those bodies, you won’t be able to eat. The victims were my
friends. We used to eat noodles together every night. The painful thing
about their death was that so many of them didn’t get paid for the work
they did before they died. They laboured in vain. About 15 dead bodies
were recovered within a space of time on that fateful day. Some are
insinuating that the heavy wind that accompanied the rainfall  on that
day caused the collapse. But from my own point of view, the use of
substandard materials was responsible for the calamity.”

Residents of adjoining high rise
buildings, who spoke with our correspondents, have, however, expressed
fears about the strength of their houses.
One of them who did not want his name in
print said:

“ There is no how that one would not have fears about the
strength of the buildings after the incident. It is the collapsed one
that we know about, nobody knows what would happen to the already
completed ones. If any of the completed buildings, should collapse, God
forbid, the casualty figure would be very high. I think the government
would need to carry out tests on all the buildings to check if they are
strong enough for people to live in. if you watch some of the buildings
under construction, you will see cracks all around them, especially the
ground floors.”

“ I have
been fear-stricken since the incident happened. I have fears about the
safety of my children and family members. So many estates are springing
up in the neighbourhood everyday without the relevant authorities
overseeing them.  They have observed that building housing estates   in
this area is very lucrative and consequently not concerned about the
quality of materials they use in building the houses.”