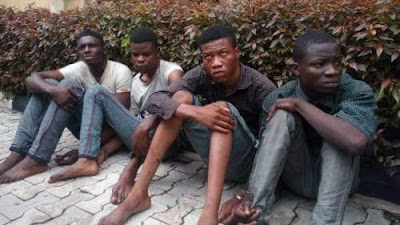 Four undergraduate students allegedly gang raped a female student of the Adeyemi College of
Education (ACE) in the state. The victim, a 22-year-old History and English student is also an
estranged girlfriend to Timilehin Akinola of the social studies
department in the same college.
The Ondo State Police Command have arrested the  suspects were identified as Olakunle Adetuyi, Timilehin Akinola,
Tobi Olagbaju and Adebisi Adeyemi, all aged between 24 and 26. A fifth
culprit, Eric Nwage, is still at large.
Parading the suspects before newsmen in Wednesday,
at the command headquarters in Akure, Hilda Ibifuro-Harrison, the Ondo
State Commissioner of Police said the victim was lured to the home of
Olagbaju, who is a part-time student of Rufus Giwa Polytechnic Owo.
After the student arrived at Olagbaju’s residence located at No. 17,
Funbi Fagun Housing Estate in Ondo town, they took turns raping her.
A very close friend to the victim reported the case to the school
private security outfit, who later arrested the culprits and after a
discreet investigation handed them over to the police for prosecution.

“One of the suspects, Olakunle, took a video of their heinous crime as
they took turns on their victim one after the other, and later abandoned
her and threatened that they would use charms on her if she ever
revealed the incident to anyone.” said Mrs. Ibifuro-Harrison.

“The phone and charms used in perpetrating the crime were recovered and
the case was transferred to the Department of Criminal Investigation,”
the police commissioner said.

She added that the victim, whose name was withheld, is currently recuperating at the hospital in Ile Ife, Osun State.
In his confession, Mr. Akinola admitted that he and his friends raped the victim.

“I have been a close friend to her (the victim) and always advised her
to shun her wayward attitude, but she wouldn’t listen. One day, she
called me after the class lecture and said that we should hang out. I
later invited her to my friend’s place where we forcefully took turns
over her,” he said.

Basket Mouth gushes about wife, Elsie Okpocha, as she +1 year older (Photo)
The killing is too much – Daddy Showkey cries out over killings in Ajegunle
To Top