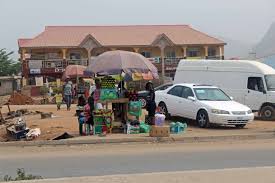 According to punch newspaper, the accident, which occurred along Ozoro Road in Oleh, Isoko South
Local Government Area of the state, also claimed the life of a
motorcycle rider identified as Chukube.

An eyewitness, Joyce Ejiro, said that the pregnant woman was waiting
by the roadside with her four children to board a car after closing for
the day when a driver, who was fleeing from his relatives, hit them.

It was gathered that the driver was trying to escape after snatching
N200,000 deposited as part payment for the sale of land belonging to the
deceased woman’s family.

Investigation revealed that members of the family had offered a piece
of land to a buyer for N400,000 and the buyer, who accepted the offer,
made a part payment of N200,000.

There was, however, a dispute among the family members over how the
money would be shared. While some members insisted that the money would
only be shared after the buyer completes payment.

In the course of the heated argument, the driver, who is a member of
the family and distant relative to the woman, snatched the money and
took off in a Hilux Van.

Upon realising that he was being chased by three other family members
in a Camry, he suddenly swerved in a bid to overtake another car, but
control and ran into the motorcyclist, who was riding towards the same
direction, also hitting the woman and her children.

It was gathered that the vehicle dragged them and the motorcycle for
some distance before coming to a halt after which the driver absconded.

It was gathered that the Camry somersaulted several times but the
occupants made it out and attempted to escape before being apprehended
by sympathisers at the scene of the accident.