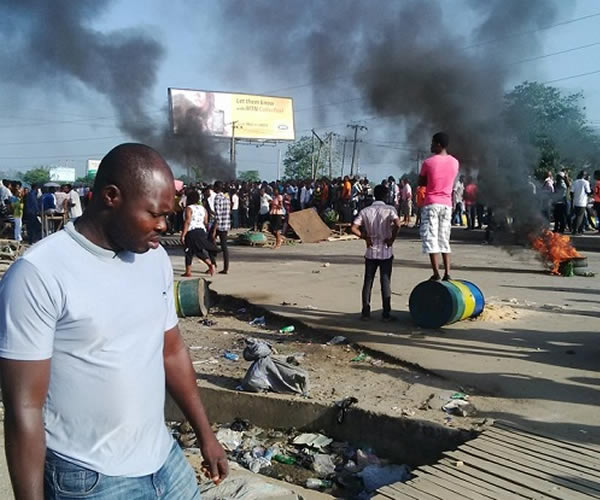 The protest was said to be peaceful but there are reports that police stormed the protest and shot and
killed a student.

Punch newspaper however reports that it wasn’t just one but two students that died.

One of the placards of the protesting students reads, ‘Say No to No School Fees, No Examinations’.

“We have pleaded with the management of our school on several
occasions to extend the deadline for the payment of the school fees to
second semester, but to no avail.

“We will prefer the school to be shut down until the management
accepts our position on this matter. We are going to continue with our
protest until the Vice Chancellor comes down here to address us,” one of
the leaders of the protesters vowed.

However, as of 3.30pm, no representative of the institution was around to speak with the angry students.

Another protester, the President, Edo State Students in UNIPORT, Mr.
Andrew Osose, said, “The management of the school did not consider the
real life situation before trying to enact the academic policy.

Kemi Olunloyo has something to say on Iyabo Ojo's wedding photos

“They said if you don’t pay the school charges, you cannot write
exams and we the students pleaded with the management that let it be the
second semester exams.

“We pleaded that they should open registration till one week to the
second semester exams because all fingers are not equal. But the school
management paid deaf ears to our plea.

“We have consulted and we have consolidated and we are still
consolidating because the protest is peaceful. We are not destroying any
property and we are not doing anything violent. We are only trying to
make the public hear our plight.

“They are sending text messages to the parents of the people who have
paid to tell us that we should write our own exams and let those our
mates that have not paid to suffer, we said no because even the Bible
commissions us to speak for those who cannot speak for themselves.

“We are doing this because of the economic meltdown, which the
country is into. There are students whose parents just lost their jobs.
How would they be able to pay? We know the nature of our economy now;
how would students meet up to pay?

“Most of the lecturers in the senate that are making this policy did
not go to school with their own money. They did not come from rich
background, but they have all forgotten their root. They want the
students to pay by fire by force.

“We are paying N2,000 each, which amounts to N97 million every year
for National Health Insurance Scheme, yet they do not give us health
attention.

Reacting, the Deputy Registrar, Information of UNIPORT, Dr. William
Wodi, explained that the protest was not about any increase in fees, but
about few students, who wanted to write exams without paying their
N45,000 school fees.

Wodi said that while 98 percent of students had paid and ready to sit
for the exams, the two percent remaining refused to pay, even after
extending the deadline on five occasions.

Maintaining that the fee was not new to the students, Wodi added that
the immediate past administration had directed that no university
should take beyond N45,000 as fees.

According to him, “The problem is not the school fee policy because
we have been enforcing it since the past administration. It is not a new
rule that students should pay outstanding levies. The issue is the
refusal to pay.”

The UNIPORT spokesman, who said the first semester examination for
the 2015/2016 academic session would no longer begin on Monday
(yesterday) as schedules, warned that those who failed to pay their fees
would carry their courses over.

“We have continued to extend the deadline for the payment of the
fees. The deadline was first moved from February 12, 2016 to March 11
and to March 30.

“We moved it again from March 30 to April 5th and now to April 7th and we said we are no longer moving it further. But they are saying that the economy is hard,” he said.

Wodi, however, disagreed with the position of the protesting students
over the claim that some universities were less than the N45,000 being
charged by UNIPORT.

“It is practically impossible to run the school free of charge and we
cannot use the fees of those who have paid to subsidise that of those
who have not paid.

“We are not expelling students; we are only saying that those who
fail to pay will not be part of the exam and they are carrying the
course over,” he added.

Meanwhile, the university senate has shut down the school with immediate effect.

All students were forced to vacate their hostel accommodation before 6: 00 pm today. 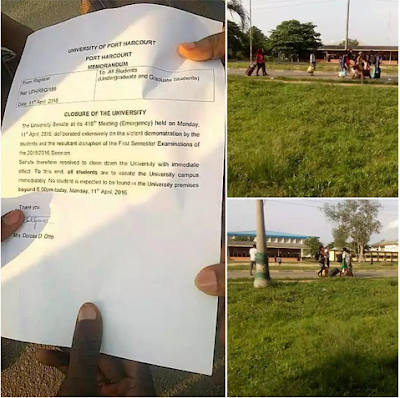 Related Items:
7 Comments
Have you seen the AY Comedy skit that everyone is talking about?
Beware of the new trick of fraudsters on Instagram
To Top