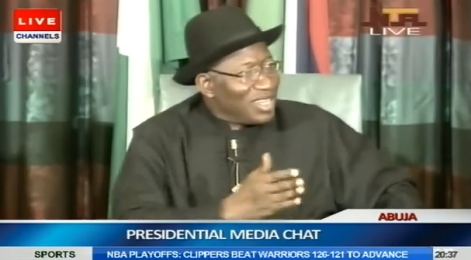 The 7th edition of the Presidential Media Chat has come to an end and here are some of the things GEJ said:
Chibok Girls:  Wherever the
girls are, they (the military) would get them. He said security
personnel are working
round the clock to rescue the girls and also pleaded with parents
and guardians of the missing girls to cooperate with security personnel
to get the girls freed. He said no negotiation has taken place because
no one or group has claimed responsibility for the kidnapping.

On reports of them being married off, the president said “To who?”. He
said the Principal of the school told him that 53 of the girls have
escaped from the kidnappers.


On why his government
hasn’t dared to go to Sambisa Forest where Boko Haram men are believed to be staying, GEJ said “If
I go there or send any of my ministers they will just kill you.”

On seeking international help for the security challenges
Nigeria is facing, Pres. Jonathan said he has reached out to Pres. Obama
twice on the matter and security personnel from America were sent down
to Nigeria. He also said he has reached out to the Presidents of
France, China and other neighboring countries such as  Cameroon, Ghana
and Benin republic for assistance.

On his declaration to run again, he said he believes that is
not what is important to Nigerians. He said security, food etc are the
things on the minds of Nigerians and also said the PDP which is the
“Champion, one with the cup” is waiting for the opposition to field
their candidates so that the PDP would know who they are up against.

President Buhari disappoints those thinking he would change if reelected

On the strike by Polytechnic lecturers, he said “we are handling it”.

Quotes:
* “I don’t know where they are… there is no confirmation of the
location of the schoolgirls, you are a journalist, you know more than
me.”

* “If I exercise 40/50% of my powers, Nigerians would say I am a
dictator. Some African leaders who used only 60 were condemned as
dictators”

* “I assure you that we will
get the girls out but we can only do it with the co-operation of their
parents and guardians.”

* “Over 70% of what they call corruption in Nigeria, is mere common
theft. The word corruption is being abused, it’s just mere theft.”

* “Even when I’m in church I am monitoring what is
happening. Anytime I get reports of an attack somewhere… my face will
change immediately… my expression will change. It used to happen every
Sunday

* “Anytime I hear of any one Nigerian dies I feel
pained… even if it’s a Boko Haram member – I am their president.”

* “Pakistan terrorists have
been fighting terrorism for over 10 years now so it’s not something that
a 6 months State of Emergency can solve.”

* “The Petroleum Minister has
appeared before the Parliament for over 200 days… in the Nigerian
Parliament you’ll agree with me that there is more politics than work.”

* “People have been confusing
corruption with stealing. If public officers steal money they term it
under corruption….”

* “PDP is the champion. We are the ones holding the belt. We are waiting to see the challenger”

* “If Sanusi
hadn’t been suspended he would have come up with a different figure… If
anyone steals $50 billion or $20 billion anywhere America will know,
they will tell you where it is; it is their money.”
“I don’t want to be a dictator who does things anyhow” in reference to the SEC, DG

“Allegations that the girls have been sold out as wives is untrue, there’s no evidence”

“50 billion dollars cannot miss. Its ridiculous, because even the USA will know its missing. Its their money”

“Some
people say O the president is too gentle, I have been a president for
about 4yrs now, ask yourself how many service chiefs have i changed, how
many police heads. have I changed. No other person has done that”

“No human being can satisfy everybody. If I change my cabinet everytime they complain of corruption, what does that make me?”

“The
ministry of petroleum has aircrafts. They have always been using Jets,
and when their jets have problems, they hire. I don’t know”

“Even
the richest man in Africa, Aliko Dangote, if we ask him to bring 10
billion dollars, he won’t bring it in cash”- in reference to the missing
20 billion dollars.

“APC that is an opposition party has not
announced their presidential candidate, you are asking PDP to announce.
We are the champions, the leaders, the Cup is in our hands. The
challengers have not even announced”

“The CBN governor is no
ordinary Nigerian, he is the governments banker. He said 50 billion
dollars is missing, then 45 billion, later 20 billion dollars. He just
kept changing figures, if not for his suspension he would probably come
up with a new figure”

“I never said Boko Haram infiltrated my
cabinet. The FEC is the cabinet made up of the President, VP and
ministers, what I said is that in “the government which is made up of
three arms”

“”If we attack Sambisa forest, the insurgents will disperse, go back to the villages and cause more harm”

“There must be some bad eggs in the basket, some weavels.” In reference to the Nigerian military.

“I feel hurt each time a single Nigerian is killed, including boko haram because they are still Nigerians”

“We have asked countries for support including USA, UK, France, Cameroon, Chad e.t.c.”

“We advice Abuja residents to stay at home during the World economic forum, for those few days”

“If you cross carpet to another party, the constitution states that you’ll lose your sit.”

“We need support from the US to tackle terrorism. We need counter terrorism logistics support”

“I
pray and believe that the chibok kidnapping will not be like the
missing Malaysian plane with over 200 passengers. It has not been found
even with the best technology at work”

“The press over played the petroleum scandals to get at the minister. And when they failed, they stopped”

“Convey
this to the parents and guardians of the Chiboks girls, we need
photographs of those girls. We promise we will find those girls”

4 Comments
Come take part in the National Children And Young People’s Media Summit (NCYPMS) 2014
A True Love Story! He knocks me off my feet – Kemi and Ese’s fairytale wedding
To Top