You all know this CKN guy that has practically visited all the major and controversial churches in Nigeria. 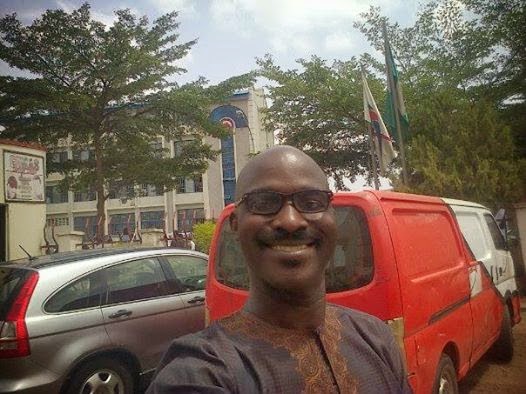 I have also attempted to visit T B Joshua’s Synagogue. I know for sure
that I have worshipped at Winners Chapel as well as several parishes of
Redeemed Christian Church of God but nothing prepared me for the visit
to Mountain of Fire Mission today.

For several years I have nursed the idea of attending this Church. The
reasons were not far fetched. Even on my street, there is a local branch
of the Church that commands fire and brimstone at
every single minute. I made up my mind that if I ever attend MFM,
definitely it will be at the Church Headquarters along Lagos Ibadan
expressway.

Well, today I braced the odds and decided to pitch my tenth with MFM HQ
in Abuja located at Utako area of the city. The church is a massive
four-storey building located directly opposite Chisco Motors Park,
Utako. It is also a few meters from another Church, TREM.

Arriving the venue was easy but just as expected there
was no parking space. The whole vicinity has been taken over by exotic
cars stretching over 500 meters. A section of the road leading from Jabi
Park towards Berger roundabout has been blocked to traffic by FRSC
vehicles to accommodate several cars. I had to make do with parking at
the new ultra modern Utako Market for a fee. That done, I trekked the
remaining length of my journey by foot.

At the gate, three stern looking fully armed soldiers were on guard. A
pick up van filled with policemen was also there. At the main entrance
were regularly security of the church armed with bomb dictator hand
metals. Search was brief. I made my way to the main hall, it was filled
to the brim. I was directed to the first floor, that was also filled to
capacity, I finally found a seat on the second floor.

The sermon of the day was already on. The man of God
was preaching on the Blessing of Giving (GENEROSITY). I entered at the
point when he was making example of his university days abroad on a
scholarship.

According to him, while his mates were using their money to ship cars to
Nigeria for sale, he was using his to take care of the poor and needy.
Today according to him, he is far far better than all of them. Infact he
gave an example of one of them who recently was afflicted by illness
and was brought to him on a wheel chair. After taking a look at him, the
holy spirit told him that it was too late for the friend. He asked them
to take him to a hospital and within days, the guy was dead.

He also spoke about a man that was so poor that he gave his only egg as
an offering to a man of God who initially refused to accept it but was
asked by the Holy spirt to collect it. Weeks and months later, that
generosity made him to become the biggest poultry farmer in his
country.

Someone sowed his only Jeep one day and was later rewarded with so much
blessing. He went on and on again. The totality of his preaching was
that people should learn how to give. It pays to give than to receive.

That done, the main business of the day started. I have
been waiting for the prayer sessions which I have been told were the
bedrock of MFM. And trust me, it did not come in short supply. After the
preaching, the man of God asked us to stand up.

It was prayer time. People don’t just pray anyhow at
MFM. The man of God leads with prayer points. The first prayer point was
..Ohh God, accelerate my speed of Blessing .. He repeated it twice and
they say Fire..

Come and see everyone, tongues upon tongues.. It was hysterical
.Everyone were jumping.. MFM members have their way of starting prayers.
They start with a clap, then the nodding of head.. It’s like they have
been tutored.. The way they shake their heads like people under serious
spell. All I was hearing around me was fire, fire, fire, fire, die, die,
die, fire, fire, fire.

Chineke, what is this? The shout for fire was so loud that I had to open
my eyes. You can imagine what was going through my mind. Iif actually
fire starts, how many exit doors do they have in the hall, funny enough
just one. I picked my bible and moved closer to the door.

How can people be playing with fire fire fire like this?

Then the man raised his voice and everywhere went quiet again. The next prayer point was.. Every gang up against my spiritual speed must scatter…

Wow, again they started.. Every power, every speed, every mountain, the
lady beside me was throwing punches like Muhammed Ali, I moved away from
her because the way she was going about it, she may strike me with a
spiritual blow ..wetin i go talk for house? They were shouting at the
top of their voices. Every spiritual, every gang, every every, heiii,
see gbege. This mountain people na wa for them o.

The voice came again and as usual, everyone stopped.
The next prayer point was.. God, please multiple the power of my youth..
They didn’t even wait for the man to finish this time around and it was
power, youth, youth power, haabababababa babababababa, rararararar,
rururuu, die die, die ,fire ,fire ,die ,die..haaa, how many people do
they want to kill o.

Never in my entire Christian life have I seen anything near this. The
men ,women, young, old, elderly, sisi,  bobo, one guy beside me decided
to remove his jacket, he was sweating all over and was shouting at the
top of his voice.

Once again, the Pastor raised his voice and we went quiet. The
next prayer point was.. By the end of this month, my enemies will
announce my breakthrough.. This particular prayer had the highest noise,
by now we have reached a crescendo. It was like this was the main
prayer point everyone was waiting for..

I was hearing, my enemies die before my own eyes, die in my eyes, die
for my breakthrough to come through, die die die.. I was wondering why
all their prayers centre around die. If every one dies, who go remain I
asked myself.

Fire born dem, born their family, born their children, born everyone
around them..Haba, I didn’t hear the man of God ask for that, but people
were burning and burning their enemies with their tongues.

Again he raised his voice and we all kept quiet. The
man of God handed over to another man of God by this time, it was child
dedication, and eight wonderful babies were dedicated to the glory of
the Lord. At this time, I thought, it was all over, who sai! It was then
we entered Scene 1 Part 2.

At this time, I was having serious headache, I couldn’t cope with the
prayers, my head was aching like hell, the shout was unbearable. I
wanted to leave but I had the feeling that some people will be wondering
who is this one that is leaving when the prayer was at its peak. I had
no choice than to join in mumbling things that even myself did not
understand.

That lady beside me again has now gone gaga. Her shout could wake the
dead. Which kind wahala be dis nah. The woman was jumping, clapping,
weeping all at the same time. I was watching the drama. She looked at me
and I pretended to be enjoying the flow, I started jumping up too. I
started clapping, I was singing, I was dancing skelewu, I also tried
Dbanj style, I combined it with Tiwa Savage’s Eminado Eminado and ended
with Surulere by Don Jazzy.

The lady stopped and was looking at me. I had my eyes closed, I didn’t
even know I was shouting that loud until she touched me. When I opened
my eyes, she was still looking at me and laughed. We both laughed and I
gave her a wink.

It was getting to 11 am and there was no sign of the service ending.
I was not enjoying it again. I have had my fill of MFM, it was time to
go. Just at that moment, the man of God raised another prayer point..
Let my anointing found me at the right place at the right time…

Of course who doesn’t want such an anointing, the chorus started again,
blabababababa, right place, find me, even in my closet find me, even in
my house find me, even at my ladies place find me, in my working place
find me..Haaa, how many people this spirit go find so. But it was
obvious, most of the people visiting MFM came to get their problem
solved and they latch at every prayer point. We also had prophetic
prayers for the coming week.

All in all, for over one hour, I was on my feet. All my
legs were aching like hell. While I was getting weaker and weaker by
the minute, the members were asking for more. You could see the relief
on my face when the man of God finally said the last prayer which lasted
for another ten minutes.

From all indication, Mountain of Fire is not a place for the weak.
Any day you make up your mind to attend, be ready to kill people with
your tongue. Be ready to bring down fire to burn your enemies. But if
they all get burnt, what happens to the word of God that asked for
forgiveness for your enemies?

The MFM people don’t believe in forgiveness of their enemies or so it
seemed to me because all enemies MUST DIE and DIE. And how come all the
women don’t wear jewelries and make up, well that will be the report for
another day.

Before going to Moutain of Fire again, I will really fortify my energy. Nobody forewarned me, but I now know better.

If you are my enemy, DIE DIE DIE DIE ..Fire burn you, your family and entire household.. No vex o, na so MFM teach me today.

Related Items:
17 Comments
“My wife risked everything to be at National Conference” – Dora Akunyili’s husband
Photos from Goodluck Jonathan’s daughter’s ‘After-Party’/Carnival
To Top