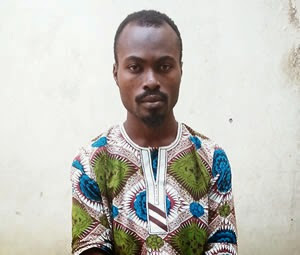 Tunde Ajibike a former guard in Lagos, recently turned himself in to the Police after conniving with maid Angela  and others to rob boss of N100,000.

According to reports by Punch,Tunde Ajibike, 27,  who arrived in Lagos May last year, was lucky to get a job with a veterinary doctor, identified simply as Dr. Joshua. His primary assignment was to care for the dogs under his boss’s care and also undertake home visits to care for clients’ dogs.

But barely two weeks after,  of their clients, Mrs. Ada (not real names) offered to employ him as a guard in  in Okota area of Lagos.

Unfortunately, that luck has landed him in detention where he is currently helping the police in an investigation into how he colluded with three others and staged a robbery attack on Ada.


When Ajibike, now a suspect, resumed duty as a guard in Ada’s house, his responsibilities were to include opening the gate, washing their cars and clothes, taking care of the dogs; four in number, and maintaining the house. For these, Ajibike enjoyed free accommodation, three-square meals and N20,000 pay at the end of the month. Life was good for him, he told Saturday PUNCH.

“Dr. Joshua was not happy that I wanted to leave but I had made up my mind because the offer to work for Mrs. Ada was a juicy offer. So I left.

Ajibike said that while he was still basking in the euphoria of a new job and enjoying his newly found job, trouble came knocking at his door when the house help of his boss, Angela, 22, approached him to arrange for some boys that would come and rob the house so they could make some money.

“Angela came to me and asked if I was being treated well, and I told her I was enjoying my work and that they used to give me money apart from my salary, but she complained to me that they were stingy to her. She said I should set them up. I disagreed but she kept disturbing me.
“She even attempted to sleep with me but I refused. I felt I had no reason to do that because the family was nice to me. After some time, she reduced the food she was giving me, and sometimes she wouldn’t give me at all. I complained to madam about the food, but she said I should sort myself with Angela.
“She kept disturbing me to arrange some boys to come and rob madam since the husband was not always in the house and when the pressure was too much on me, I agreed.”

“One day, it was just the two of us and she came again. I was confused, so I spoke to one of my friends, Suraju Raheem, who later introduced me to another guy, Skelewu. I gave Suraju’s and Skelewu’s numbers to Angela, so she arranged with them.
“On January 28, 2015, the day of the incident, Madam’s husband had travelled to the East, so Angela said I should open the gate for the robbers before madam came back in the night, so I allowed them in and told them to stay in the generator house. She said madam had some money which the husband gave to her before travelling, hence, that would be a good time to rob her.
“They were three; Suraju, Skelewu and one other person whom I had not met before. I gave them my cutlass, the knife I used in peeling orange, and the rope I used in spreading my clothe, in case they would need it.”

Ajibike explained that the moment the madam drove in around 8pm, two of the robbers, who had been lurking around, went in with her and they headed straight to her bedroom, tied her legs and hands on the bed and demanded money.

He stated that Angela had already taken care of the children, saying that in a bid to make him look innocent, one of the guys gave him a slap and he started begging them. Possibly what gave Ajibike away was that one of the guys mentioned his name while the incident lasted.

“Angela also joined us, lying on the floor and crying. And one of the guys mentioned my name. When they finished, they collected money from her and left, leaving her with an injury on one of her ears. When they left, madam said she suspected that I had a hand in the incident but that she would come back to it, so she drove herself to the hospital, and before she came back, I packed my things and left the house. Angela actually advised me to run so that she wouldn’t call the police to arrest me,” he stated.

After leaving the house that night, Ajibike said his conscience kept nagging him. Thus, he said he spoke to the friend who had linked him with the doctor earlier. He said they both went to the Alakara Police Station, Ibadan to report the incident.

“Then, I was detained and transferred to Lagos. I have not heard from the guys, I did not collect anything from them, I was just hoodwinked to dupe those who had been good to me, and now I’m regretting my action. I didn’t even know how much they stole. The girl messed me up and now I’m suffering for it.”

A police source said the police had yet to link Angela to the story, saying investigation was ongoing.

Lagos State Police Public Relations Officer, Mr. Kenneth Nwosu, promise to call back to comment on the story but had yet to do so as of the time of filing this report.