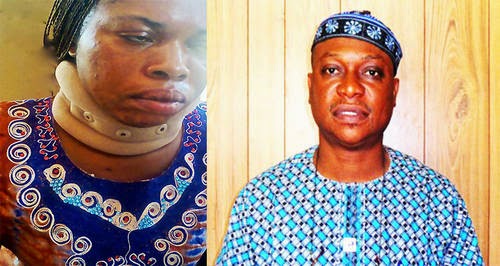 Akin Akinbobola, an aide to Governor Olusegun Mimiko of Ondo State, has been arrested for assaulting one of his female workers,
Funmilayo Alao-Kwabe in his office in Akure.

According to SaharaReporters, Mr.
Akinbobola, who is the chairman of the Ondo State Football Agency (ODSFA),
allegedly gave Ms. Funmilayo a brutal beating after the two had a row over
salary increment at the agency.

The alleged victim heads a maintenance
department at the agency. An eyewitness told a SaharaReporters correspondent that
the ODSFA chair beat his subordinate so severely that he inflicted a serious
neck injury on her.

Another source disclosed that the fight originated from the chairman’s sudden
decision to increase
junior employees’ salaries, adding that he then approved a
N2000 increase for Ms. Funmilayo, increasing her salary to N42,000. The source,
a staff of the agency, revealed that Ms. Funmilayo considered her pay increase
too paltry. “She was infuriated and walked up to the agency chairman to demand
an explanation. He got angry and began to beat her brutally,” the source said.

Another source at the agency said the workers felt that Ms. Funmilayo was
poorly treated. “Our Chairman [Akinbobola] increased the salaries of the junior
casual workers, who were mostly in maintenance department, to N40,000 while
that of their head, Mrs. Funmilayo, was increased to N42,000, just N2000
difference. This is what caused the trouble,” he said.

Contacted by a correspondent of SaharaReporters, the alleged assault victim
narrated her version of events. She said she was angry about her small
increment. After the chairman refused to take her telephone call, she said she
sent him a text message asking for an explanation.

Sanwo-Olu speaks on lifting lockdown in Lagos for Easter celebrations
“He called me after reading my text message and asked for
the meaning of the content in the message I sent to him and I told him the
meaning. I never knew he had an agenda in mind, he invited me to come over to
his office and I went there.
I got to his office and he started embarrassing me, [asking]
why did I send such a message to him. During that process a lady came inside
the office and I ordered her out because I was still discussing with him. But
the next thing was he slapped me and beat me up. He pulled out some of my hair
and nearly snapped off my head and threatened to kill me. During the fracas, he
broke my neck and ran away after I collapsed on the floor of his office. I
can’t turn my neck [any more].”
Some staffers at the agency alleged
that the chairman used to date the alleged victim, adding that he tried to
humiliate her because she broke up with him and had spurned all efforts to
restart their relationship.
I might go back to my husband - Mercy Aigbe

Contacted by a reporter, Mr. Akinbobola denied assaulting Ms. Funmilayo,
insisting that she hurt herself while struggling with him. He refused to answer
any questions about his alleged romantic relationship with the woman. “It’s a
personal issue,” he said, adding, “Please let us end the discussion.”

The aggrieved woman’s lawyer has petitioned the Inspector General of Police
over the case. –