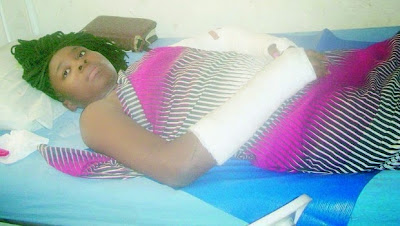 Ada Nba Agbazue, the 17 year old
girl who fell from an Abandoned 18 storey building in Abule-Ajanloco,
Lagos, while trying to escape from a facebook lover turned rapist, says
that her assailants intended to kill her for ritual purpose after
forcefully taking carnal knowledge of her.Nba Agbazue is currently lying at the Ilemba Ajangbadi hospital in Lagos
where she is being treated for multiple fractures and other injuries.

She attributes her being alive to a miracle, stating that she finds it hard to explain her survival.

Nba Agbazue was lured to the abandoned storey building on December 26th
by a man she purportedly met on facebook as exclusively reported by
Saturday Mirror, last week.

.“My being alive is a miracle and I am grateful to God. With wha t I saw
in that room, that man can be a cultist, he can be a ritual killer.He
told me that he is a Buccaneer,” she narrated, tearfully.

According to her, a facebook friend she identified as Michael lured her
through Facebook to the abandoned building.Agbazue, on that fateful day,
got dressed for a date with Michael. Narrating her ordeal, the young
girl stated that she got a call on her mobile phone.

“My phone rang and a man said he wanted to speak with me.I don’t know how he got my number but he told me that it was from my Facebook page but he is not my friend on face book. He told me his name is Michael but he is not any of the Michaels that I know.
“I did not see any harm because he said we should meet at the Ile -Nla
Bus Stop which is a busy place. When I got to the bus stop, I noticed he
was looking at my picture on his phone. He looked up to see my face. He
was standing opposite the road,” she narrated.

Agbazue said she became alarmed at first because the man did not look
like the Michael she knew on the face book. At that point, she hastily
pointed out that she does not know him.
As if trying to reassure her, the stranger told Agbazue to cross over.
Not realizing the mistake in doing so, the girl crossed over. The man
touche
d her and immediately, as narrated, matters changedAccording to her she lost all will to resist the man.

“He touched me and immediately, I lost my senses. I started following him.
It was just him, no other person was with him. He is a young man around 24 or 25 years old. “He told me that he is staying with his mum and brothers in the uncompleted building and they have neighbours.
He told me that they live in the uncompleted building (an 18 floor
abandoned Federal government building). She explained that this was
about 4.30 pm, that day
“As we were going inside the building, I saw a lady coming out from the
building. I saw passers-by and people playing ball. When we entered, he
took me to the fourth floor and
we entered a big room.

I saw clothes. He told me that even the other side has neighbours. “When
we continued climbing up the stairs, I told him that I was tired but he
pleaded with me. At the walls, I saw some strange diagrams, cultists diagrams painted on the wall. “I saw a human head by the wall.

The head is not fresh but the head has long weave on(attachment) on it .
I wGas scared when I saw the head. I wanted to go back but he brought
out a knife.

“I was kind of scared but not too scared. He ordered me to keep climbing
up into the wider room,” narrated the girl. According to Agbazue, the
place looked like an umbrella and has many windows.

She said that the man ordered her to leave the window. But she saw also that there was the word ‘buccaneer’ on the wall. The man called Michael then told her that he is a Buccaneer. Continuing her narration, the girl said that she saw lots of cultist diagrams on the wall.

“I moved away and he told me to start pulling off my clothes. I told him
you are not my husband so I cannot pull off my clothes for you; he told
me that I was proving stubborn but I continued to beg him, but the more
I begged him the more he used the knife to threaten me. “He said if he
calls his friends, it will be too much for me” she said.

Michael started making calls. He made the first call and he started
calling the second person.According to her, the man said that she should
not try to run. Now desperate, she moved to the window looking for an
escape.

She tried to climb down by holding a pole that she saw. At that point,
he ran to her and held her hand, “trying to prevent me from escaping.
I used my other hand to push him and that was how I fell to the ground,”
she stated. Residents of the area saw Ada as she fell from the building
thinking that she might be an apparition. Police authority however says
that Agbazue was a victim of bad facebook relationship.

This love between Ibinabo Fiberesima and Goodluck Jonathan though…
KICC’s Ashimolowo knows who will emerge winner of the February election!
To Top