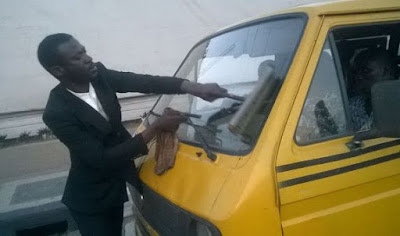 Some weeks ago, it was widely reported that Abdulahi Olatoyan rejected OUCH designer, Uche NNaji’s offer to empower and establish him (HERE)...well, this is his side of the story!

Abdullahi Olatoye, The Windscreen Cleaner: A Victim Of Our Lost Humanity

Someone that goes by the handle Hidentity just released a trouble piece. Read below…
Today, I should be quoted for saying the greatest threat to humanity is
the human that seeks to benefit from its working. We are diverse in
configuration – good, bad, crooked, cunning, pathetic, sympathetic, and
yes, the hybrid of two or more are no exception.

They are worse, the goats who disguise like they’re sheep!

I left work today with a staunch yearn for a well deserved rest. I
didn’t expect a diverse drama from the usual: Passengers and conductors
trading words, LASTMA illegally doing what is legal, the scramble for
bus, having to deal with jumping down from a moving vehicle and the
unceasing hooting by the unrepentant Lagos drivers. I remember I had to
modify my voice to sound ‘street’ and crazy just to cajole a conductor
to give me my deserved change. I am becoming a part of the system. All
of us in Lagos are mad, but the justification for my hypothesis deserves
a rare seat for the matter at hand.
Man whose wife had quadruplets after 15 years’ delay, recounts what they went through

The bus I joined was halted by the red demand of the traffic light on
the independence bridge, just close to the Maryland mall. Lo and behold,
I saw him- suited up, holding a black leather bag as he moved in a gait
of resignation to fate from the front of one bus to the other. He was
turned down by some while others marvelled at the pride with with he was
doing his work. I wasn’t sure, but then, he walked towards my vehicle
and my doubt was cleared. Abdullahi Olatoye, the windscreen cleaner!

I alighted, walked to Abdullahi and sought an audience which he granted.

‘I thought you were…’ I mumbled some words to express my consternation
as to why a windscreen cleaner turned model/tailor became a windscreen
cleaner again. ‘It turned out to be a regret, I wish I had not…’
Abdullahi responded and a stare into his eyes gave him out as a victim
of our lost humanity. We both walked to a corner as I made enquiries
from him. After about 30 minutes, I needed no sorcerer to tell me
Abdullahi has had his share of our hypocrisy. The type of promises
orphans are acquainted with and the disappointments that are connected.
Gunmen shoot collation Officer in Benue state

My piece is not to point fingers, Abdullahi was not ready to cast
imputation on the character of anybody or organisation too. I have only
come to tell Nigerians and the world: Abdullahi is back to the starting
point.

His supposed helper-the outfit entity that picked him up when his story
went viral claimed to have enrolled Abdullahi in the National Open
University, but Abdullahi told me it was not a true news. He was neither
taught any trade nor given any benefit. In fact, he had to sort himself
out for transportation anytime he was to meet the bandwagon of Nigerian
helpers.

For the record, news have been flying around vilifying Abdullahi, he was
said to run back to windscreen cleaning work as ‘HE CANNOT DO ANY OTHER
THING’. Posts have gone on instagram and other media, but Abdullahi’s
version could not be heard as his post to express his side was blocked
from Instagram. He was advised by agents of these ‘helpers’ to keep mute
as saying anything will tarnish his image. Abdullahi did, but his
situation makes a deafening noise.
Police speak on kidnappers invading Abuja

His helpers had expected that picking him up will mean a boost in their
fortune- that some multinational companies would come and their stories
will change too, but did Abdullahi assure them of a partnership with Glo
or Shell in the first place? How many apparitions of men do we have to
run from? Crooked keepers of faith and religion? Bosses and relatives
with sinister agenda? Neighbours with negative motives? The fury of the
wealthy? The anger of the poor? And the gimmicks of the helper? Maybe
Abdullahi was different, but I saw a video interview of the unilag guy
where he claimed he was not given accommodation as promised and
circulated by the humans of this nation.

Abdullahi sought my help in broadcasting his version and I shall feature
his unedited account tonight. I shall consult friends on Instagram and
twitter to do same. I have his contacts and links for any Nigerian with
the heart of a human. Abdullahi Is not looking for overnight success, he
Is only asking for an opportunity to compete. 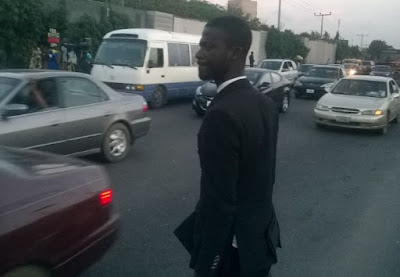 Is that too much to ask for? Or his original crime is being born in Nigeria?

Related Items:
10 Comments
Aww! Guy proposes to his woman after she caught the bouquet at friend’s wedding reception (photos, video)
These new photos of Toke Makinwa are stunning!
To Top