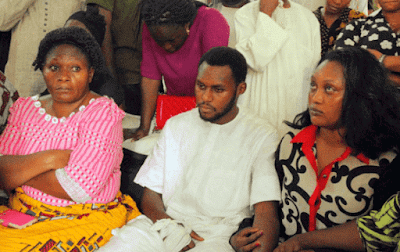 As
part of efforts to support the children left behind by the late
Minister of State for Labour, Mr James Ocholi (SAN), the Federal
Government has announced automatic employment at the Federal Ministry of
Justice for Aaron, his eldest son.
The Attorney-General of the Federation, Abubakar Malami, revealed this
to the Ocholi family when he paid a visit to his Kado Estate residence
at about 3:00pm on Tuesday, to convey his and President Muhammadu
Buhari’s condolence message.

He also disclosed that Aaron’s other siblings would enjoy scholarships for their educational pursuits,
courtesy of the Federal Government who has pledged to cushion the effect of the loss of their parents.

The Minister added that the Senior Advocate was a very critical part of the change effort of the Federal Government.

He said that President Buhari personally mandated him to inform the
family of the late Minister that his administration would do all within
its power to ensure he is not missed.

Mr Malami consoled them
that death was a necessary end that was bound to happen, adding that God
in his infinite mercy had a reason for allowing them to depart the way
they did. 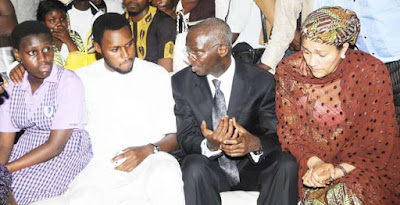 “I
am here to convey Mr President’s condolence message and he has asked me
to personally inform you that you have been given automatic employment
in the Federal Ministry of Justice. The employment letter is in process
and you can resume work after now”, he told Ocholi’s eldest son.

“Your
father was a very hardworking and conscientious member of the Federal
Executive Council who was very passionate and worked hard for the
realisation of the change agenda of this government.

“Indeed,
it is a sad moment for all of us and the vacuum which his death has
created is not only for the family, but the leadership as well. He was a
great pillar in the struggle which brought this administration to
power. He played a major role in the merger process,” the AGF said.

The
Minister of State for Labour and Employment died in a road accident
along the Kaduna-Abuja highway on Sunday, March 6, along with his wife
and son.

The deceased and his family were returning from a private visit in Kaduna.

We WAITED till our wedding night and we’re LOVIN it” – InTheMidstofHer and Hubster!
Olajumoke steps out with Mo Abudu, Omawumi, Ireti Doyle, Omoni Oboli for private movie screening (Photos)
To Top