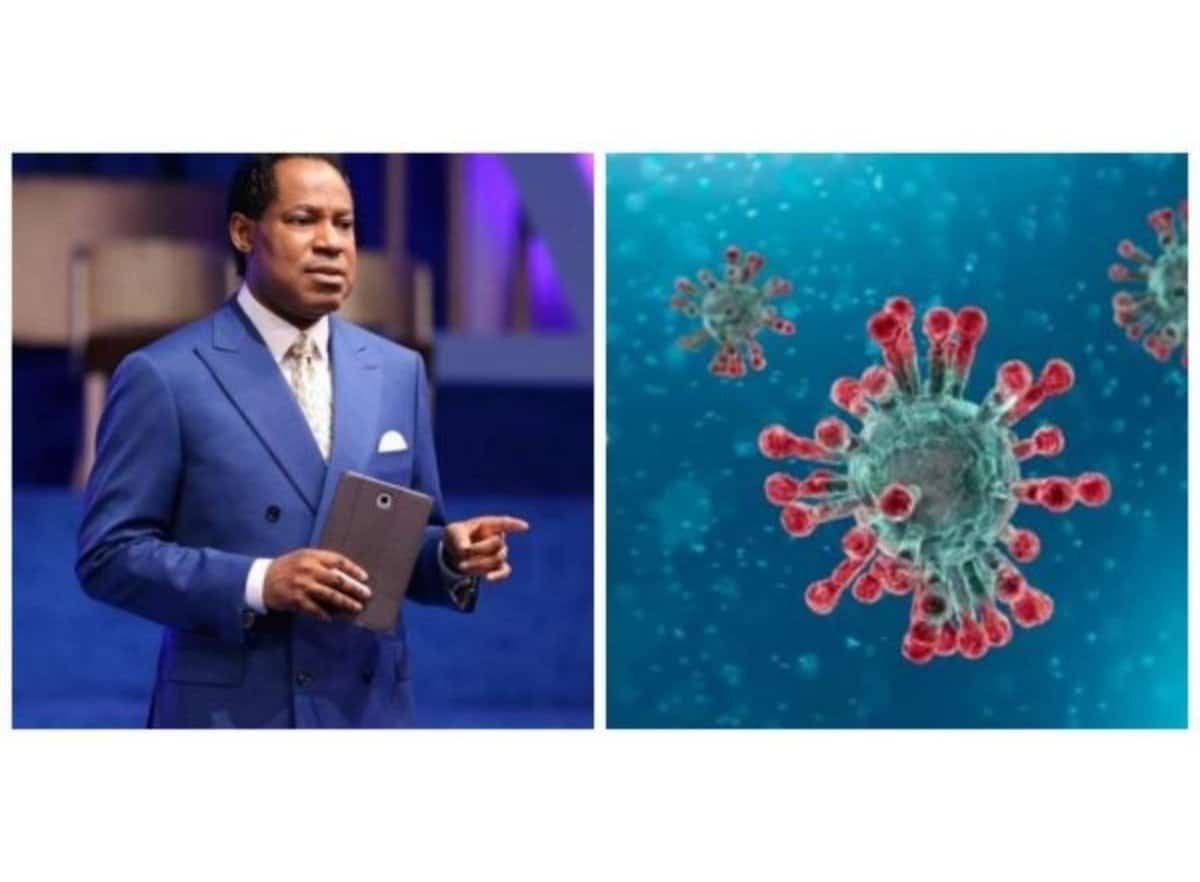 Earlier today, the General Overseer of the Christ Embassy, Pastor Chris Oyakhilome in a message said coronavirus was created in order to popularize the 5G network which is gradually gaining attention across the world.

“Where do viruses come from?’ They are not found in nature, it means they’re created. I’m trying to let you know the reason you’re in your house. I call it a global siege.

“So since they can’t vaccinate everyone, they started vaccinating children and raising them that way. You wanna know what’s going on in the world? There’s a movie called “Divergent” from 2014. That’s what the groups that are interested in the new world order are up to, to put vaccine in your body containing a digital ID, by which you as a human being can be controlled, you cease to be yourself,” he said.

According to Oyakhilome, to achieve the vaccination, “they are using 2 things: 1. They created a pandemic (Covid19) in order to create fear and panic. 2. They use internet of things (IOT), and created 5G (people can easily embrace it), which causes health issues, but you wouldn’t know because they made you love the high internet speed.

“Both strategies lead to achieving their initial plan, vaccination with digital ID. If these groups were not hiding anything,……1. They forced everyone to stay indoors (aka quarantine/lockdown), but they have people busy installing 5G connections outside.

“2. Why do they get angry when others express opposite views. They taking down their websites and posts. E.g 1. Youtube deleted many videos exposing this conspiracy, 1 by former Vodafone boss. E.g 2. Facebook deleted post by Brazil president exposing their plans.”

Oyakhilome added: “If you still don’t yet know what is going on, know today; it’s not about the Coronavirus. This is basically a group of people serving a devilish cause trying to checkmate humanity to hell. Don’t be ignorant, neither silent. This isn’t a time to sit on the fence because there is no fence. This isn’t about religion because as you can see, there isn’t one either. It boils down to two options: Life or Death.

“We are still in the age of the Church and the anti-christ cannot advance his plans yet. The Bible is clear that after the Rapture of the Church, the son of perdition will be revealed. Brothers and sisters, this isn’t a time to play with Christianity. Give your life to Christ now while you still can because these things will happen, but after the Church is raptured.”

Also, reacting, former Senator, Dino Melaye has described 5G network as evil and called for the demobilization of 5G network which he claimed has been mounted in some parts of Nigeria.

He stated that it kills the immune system, affects the respiratory system, causes cancer and hypertension and indirectly causing the deaths of Coronavirus patients.

He back his statement by sharing videos in which plants growing near a 5G network were affected by the fifth generation of wireless communications technologies.

Debunking the claims however, an Information and Communication Technology expert, Mr Jide Awe who is also the Chief Executive Officer of Jidaw Systems Limited, in an interview with Newsmen on Sunday in Lagos, noted that most of the misinformation on 5G came from a deadly mix of ignorance, unsubstantiated evidence and zeal.

Awe said there had always been concerns about the dangers of radiation from cell phones and networks, noting that even if the concerns might be genuine, they were unsubstantiated conspiracy theories.

“I was shocked when I saw 5G networks being linked to the emission of coronavirus; false information should not be passed around at a period like this where a lot of people are having panic attacks and feeling uncertain due to the virus outbreak.

“The concerns are about radiofrequency radiation from cell networks, but mainstream science studies have shown no link and research is still ongoing.

“Issues that are totally unrelated are now being muddled up on the Internet by these conspiracy theorists using the social media platforms.

“I have watched many of the videos and even read their studies on 5G, but the truth is that their so-called findings are not recognised by any credible sources in the global academic, scientific and health communities, which include organisations such as World Health Organisations (WHO), International Telecommunication Union (ITU),” Awe noted.

“It is so sad that we have prominent people in the society being hoodwinked and helping to spread the misinformation,” the ICT expert said. He said NCDC had warned that in the response to the COVID-19 outbreak, it was necessary to stop the spread of rumours and fake news.

Awe said that this rumours of 5G being linked to Coronavirus was particularly disturbing as it diverts attention and energy away from areas that should be focused on.

“5G is an incredible technology that will transform the world and lives; it will also enable us to maximize emerging technologies such as Internet of Things(IoT), Artificial Intelligence(AI) and video applications to drive innovation and productivity.

“With the right policies, it can help in addressing our developmental challenges. It will be a shame if we allow misinformation to hold us back and deny our children this unique growth opportunity.
“The funny thing is that quite a few countries including Nigeria have no 5G networks yet we already have COVID-19 confirmed people. So, how come?

“South Korea was the first to launch a 5G network and there have been no negative reports,” he noted

Awe said that people should be able to reason that technology advanced countries in Asia, Europe and America, who were competing aggressively in the 5G space, would not want to endanger their populace if the network was dangerous.

“The danger with conspiracy theorists is the fact that they just make things up because there is no proof, evidence and rigorous evaluation to their claims.

“It is disturbing that this should be our focus in this critical period,” Awe said.