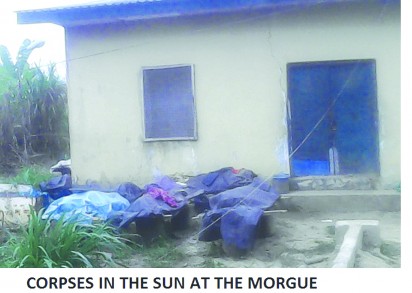 Mortuary attendants at the 44-year-old Bomadi General Hospital, Bomadi
in Bomadi Local Government Area, Delta State, stack corpses on
improvised wooden platforms after embalmment and bizarrely abandon them
to the vagaries of the weather, day and night,Vanguard reports.

The eyesore, is due to lack of space to preserve the dead bodies in the
hospital’s overflowing mortuary. Meanwhile, patients have expressed
disgust at the dilapidated condition of the health-care facility plagued
by rats and mosquitoes, which has heightened the fear of Lassa fever
and Zika virus in the riverside community. When Niger Delta Voice
visited the morgue,  reporters saw embalmed corpses covered with
blankets deserted.
Efforts to speak with some of the doctors were
futile, as none of them agreed to comment on the situation. Workers, who
spoke on condition of anonymity, said they were under pressure on daily
basis because of the challenges faced by patients.

Rats struggle for bread with me—Lawyer

A lawyer and human rights activist, E.U Opukiri, whose wife was on admission, narrated his experience:

“I am a barrister of nine years in the bar, I came to this hospital
because of the health of my wife and my experiences here in these two
days are pathetic. There was no electricity and water in the hospital
premises, a state government hospital for that matter. Corpses stacked
outside the morgue “In the night when the rechargeable lamp we were
using went off, rats came out in large numbers and spread everywhere.
Some of them came specifically for the bread I bought for my wife,
dragging it with me.

“Out of fear, I took the bread and made it a pillow at the head-side of
the bed. I was, however, uncomfortable with it because of its shape and
so I decided to put it in a cupboard-like shelf there. When I opened the
shelf, I saw that it was a haven for rats. There were so many rats that
I became afraid being aware of the prevalent Lassa fever caused by
rats. We could not sleep at night these two days we were there,” he
said.

“Again, the hospital morgue too is an eye sore; our revered and
deceased parents are dried right outside in the sun like Bonga fish,
which is right there (pointing to the morgue). Therefore, I want
government to intervene in this health facility immediately. “As a
matter of fact, I can categorically tell you that there is no water in
this hospital. All the water facilities are dilapidated, which you can
see for yourself. I had to go out of the hospital’s premises in the
night to the riverside to fetch water for my wife.”

Leader of Bomadi Legislative Assembly, Hon Bekes Tonprebofa, who was a
patient in the hospital, last year, complained bitterly about the state
of the facilities, appealed to the state government to do the needful in
the hospital. Contacted on phone, Commissioner for Health, Delta State,
Dr. Nicholas Azinge, said he was not aware of the development and
promised to investigate the matter.

First Bank staff, Indian and three others under quarantine in Ebonyi state

Why they keep corpses outside—Karetimi Chair, Bomadi Local Government
Area, Chief Oluwole Karetimi, who spoke to NDV, said the health facility
required complete renovation/rehabilitation, adding that government has
not upgraded it since its commissioning in the early 1970s. Karetimi
asserted:

“I appeal to the state government to undertake complete renovation and
upgrading of the hospital. We are aware that patients sleep with rats
and mosquitoes during the night because of its state. “The Lassa fever
that we are talking about is a disease carried by rats. Now that we
cannot assist the state government because of financial incapability, we
appeal to the Hospital Management Board, HMB, Asaba and our amiable
governor to quickly come to our aid.” On the dead bodies kept outside
the morgue, he said: “Corpses are now placed outside the mortuary
because of space, which also needs upgrading. The primary health-care
centre too needs attention. Again, if people keep their dead in the
mortuary for more than one, two years as reported, then, the management
of the hospital should formally write to the families concerned and give
mass burial to such corpses if they refuse to take them.”

Not a good omen—Royal father Traditional ruler of Kpakiama urban
community, Chief Ambakederemo Bunu, who expressed dismay that corpses
litter the outside of the mortuary, said it could lead to outbreak of
both air and water-borne diseases and called on government to quickly
intervene and save lives of the rural dwellers. He also noted that the
presence of rats in a government health-care facility at this time of
Lassa fever disease was not a good omen for the people.

Tuesday daily devotion by Pastor E. A. Adeboye (Open Heavens 23 February 2016) – How Old are You?
One NGO asked WAEC for list of Best Students in Nigeria and this happened!
To Top