Davido is currently on
tour in the USA and performed last night in Philadelphia. 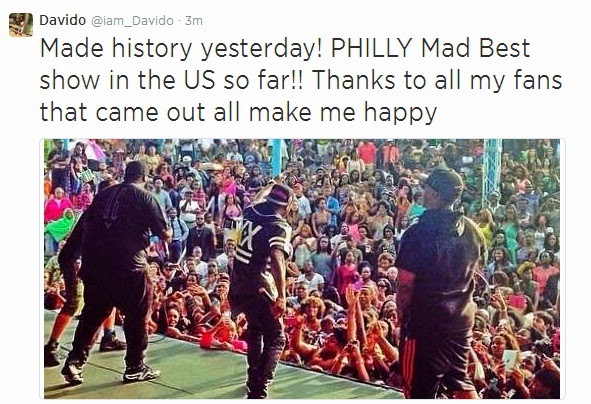 Passing at a diss at
fellow artiste Wizkid – whom he has been at loggerheads with for weeks now – he
took to his social media page a few minutes ago to brag about the concert,
saying “I made history yesterday! PHILLY Mad Best show in the US so far!!
Thanks to all my fans that came out all to make me happy”
If you have been following the saga closely, the primary reason for the on-going rivalry between the music
stars, erupted following a tweet from Wizkid when he commended a show he
attended in New York, USA.
Wizkid
had tweeted “Thank you so much New York!! Amazing show last night!!Big up @wale
and @akon for showing me love!! Proper show! Proper venue! Boys talk!! Men
work!!”
The tweet came few hours after his New
York performance on the same night Davido beat him and others to the Artiste of
the year at the African Muzik Magazine Awards in Dallas, US.
The
Leading Nigerian artist, Davido further announced plans on a collaboration with
foreign artiste Drake and Mavin records boss, Don Jazzy.
“I might not call it
‘dream collaboration’ but by His grace, it’ll work, and already, I am talking
with Drake and Don Jazzy. We would work on something very unique. My
collaboration with other artistes is not a ploy to be popular, after all, I am
not going to take the glory alone. Apart from the artistes you collaborated
with, you never know what song can make you big as well. It doesn’t matter if
you feature a big or up-and-coming artiste. That’s the main reason I am doing
this.” He told Encomium.
The announcement is coming barely weeks after Wizkid
announced his collaboration with foreign acts, Chris Brown and Rihanna.
He doesn’t know Davido - Nigerians react as US rapper The Game names Wizkid as his favourite

Wizkid’s Girlfriend Tania Omotayo has a message for y’all haters
He wants to die! Sad story of a former Nigerian boxer
To Top