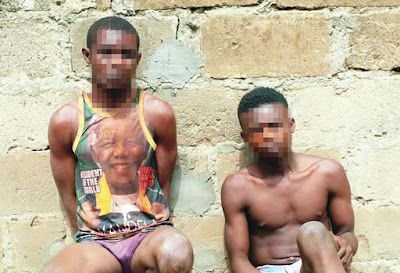 A 26-year-old conductor, Chineyen Okoro, has been arrested by the Ogun
State Police Command for allegedly abducting three factory workers in
the Sango area of the state.The suspect was arrested along with his
roommate, 16-year-old Kalu.
PUNCH Metro learnt that the workers were returning from their workplace
around 9.30pm on Tuesday when Okoro, who had a gun, and his gang
members, ambushed them in the Ntabo, Ogba Ayo area and led them to an
uncompleted building.
The Anambra-born suspect and his gang members, who were at large, were said to have dispossessed the workers of their valuables.
A victim, 24-year-old Ibrahim Oladeji, said he took courage and
challenged Okoro after the two victims (ladies) managed to escape from
the scene.

Oladeji said, “He (Okoro) and his gang members stopped us around Ogba
Ayo while we were returning from Sango. He pointed a gun at us and we
were forced into an uncompleted building. They ordered us to lie down
and collected our phones and wallets. I had about N15,000 in my wallet.
He gave the items to one of his gang members and told him to run away.
“One
of the two ladies among us managed to escape. I told the other lady,
Moji, to also run. I summoned courage and challenged him. I punched him
in the face and he hit me with the gun. He then fled.“I chased him into a
corner where a man, who heard me shouting ‘thief, thief’ apprehended
him. The police later came to arrest him.”

Moji, 18, told PUNCH Metro that her wallet contained a sum of N1,500 and a mobile phone.
Our correspondent learnt that Okoro had claimed to be a visitor to the
area and was getting fresh air when a mob descended on him.
However, he later confessed to have used the gun in self-defence when he heard people shouting thief.
He said,

“I was sitting outside when I saw people rushing towards my direction
and calling me a thief. I picked the gun and shot it to disperse the
crowd. But I was eventually arrested and beaten up. I did not rob
anybody.
“I inherited the gun from a friend six years ago after he
was killed. We were both Aiye Confraternity members. I denounced the
group after his death.”

The other suspect, Kalu, who hails from Imo State, denied involvement in the robbery.
He said,

“Chineye(Okoro), his brother and I live in a room. Chineye went outside
with a bag after we had finished cooking that evening. I don’t know
whether there was a gun inside the bag or not.
“The following day
after his brother had left for work, some policemen came and arrested
me. I don’t know anything about the robbery.”

The Ogun State Police spokesperson, DSP Muyiwa Adejobi, said the police
had launched a manhunt for the fleeing members of the gang, adding that
the suspects would be transferred to the State Criminal Investigation
Department.
JAMB warns candidates not to check UTME 2019 results from Cyber cafes, reveals new way