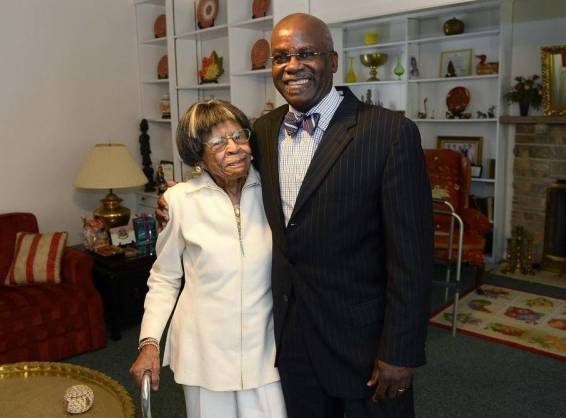 African American Rosalia Durante, 98, (left) served in Lagos, Nigeria in
the 1960s and was the sixth grade teacher of Dr. Yele Aluko (right), in
1963. Decades later, back in Charlotte, USA, she recognized his name in
the newspaper and brought him mementos of her time in Nigeria.
Because of his name and accent, it’s not unusual for Dr. Yele Aluko’s patients to ask where he’s from. But
in the early 1990s, when he got the question from this new patient – a
retired Charlotte principal and Johnson C. Smith University professor –
Aluko asked one of his own: Where do you think?

Spencer Durante guessed correctly that his new heart specialist was from Nigeria, in west Africa. This
rarely happened. In fact, when Aluko first came to Charlotte in 1989,
one area hospital administrator suggested he change his name from Yele –
pronounced yeh-lay – to Yale, so it would be easier to say.
As
Aluko chatted with Durante and his wife, Rosalia, he learned they had
lived in Nigeria from 1962 to 1966, when Spencer Durante was working on a
U.S. project to build a college that would train Nigerians to be
secondary school teachers.
Rosalia Durante said she had taught primary school in Nigeria. And she
remembered having a student named Yele. Really? Aluko thought. And he asked the name of the school. When she said Corona International School in Lagos, his jaw dropped.
Aluko, who was born in Lagos in 1954, had gone to that school in the mid-1960s. What a coincidence.

The
Durantes had seen Aluko’s name in The Charlotte Observer and made an
appointment, both to confirm he was the boy at the Corona School and
because Spencer Durante needed a heart specialist. They continued seeing
Aluko for more than a decade, but the conversations focused on medical
issues. 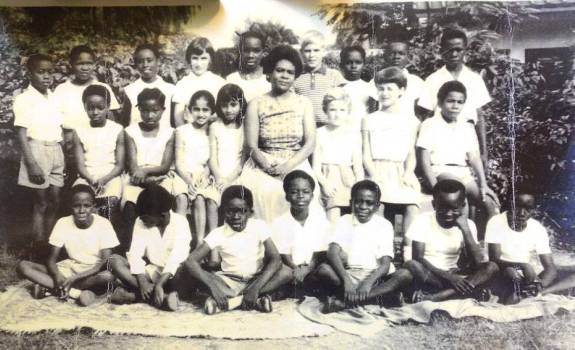 Class Picture
Spencer Durante died in 2003, at 86. Rosalia
Durante remained one of Aluko’s patients, coming to his office once a
year for an evaluation. At one of her visits, she brought Aluko a
surprise. She had been digging through papers after her husband’s death.

She’d
found an 8-by-10 copy of a black-and-white picture of her first class
at Corona, for the school year 1963-64. That’s her, at 47, standing in
the middle of 23 children – girls and boys, black and white, Nigerian,
Asian and British, mostly dressed in white.

She asked Aluko if he saw anyone familiar.

Indeed,
Aluko saw his sixth-grade self, legs crossed, sitting on the grass in
the front row. He’s smiling at the camera, resting his elbow on his knee
and his cheek on his fist.

By
what twist of fate did this Nigerian boy in Mrs. Durante’s class end
up, half a world away and more than three decades later, becoming the
heart specialist who cares for his former teacher and her husband in
Charlotte, North Carolina? 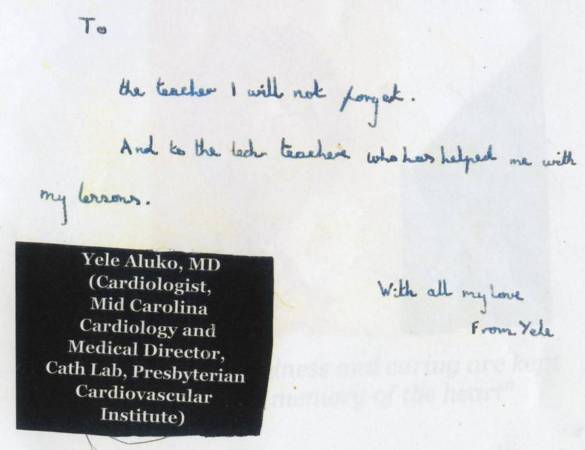 The picture had been taken outside
Corona, a private British-owned school that attracted children who could
qualify academically and afford the tuition. Some were children of
foreign diplomats. Aluko’s father was a civil engineer; his mother had
been an English teacher.

Aluko remembered having American,
Nigerian and British teachers at Corona. He got a good education, good
enough to get him into Kings College boarding school and then medical
school at the University of Ibadan in Nigeria.
He came to the United States for medical residency at Columbia
University in New York, where he met his future wife, Shirley Houston,
also a doctor.

In 1989, they chose to settle in Charlotte. Aluko
said he started a solo cardiology practice after he couldn’t find an
existing group that would hire someone with his foreign education. His
practice grew into the city’s second-largest group of heart specialists,
Mid Carolina Cardiology, now Novant Health Heart and Vascular Institute. He
often was quoted in the Observer, about new heart procedures, efforts
to reduce health disparities or the community of Nigerian doctors in the
Charlotte area.
As
she got to know Aluko, Rosalia Durante continued searching through her
scrapbooks. They bulged with keepsakes from Africa – maps of Nigeria,
newspaper and magazine articles, pictures of her students and copies of
their handwritten notes.

“I keep stuff,” said Durante, whose home
is decorated with African art, including a carved ivory elephant tusk
and a painting by a Nigerian artist.

She remembers her first day
at Corona School: “When I first saw all the boys in that class, I
thought, ‘Oh, I’m gonna have a terrible time.’” She had three
“rambunctious” sons of her own. But these boys, from several countries,
sat at attention at their desks, called her “Madame,” and raised their
hands and stood before speaking.

“They didn’t have many books, but
their books were well-used,” Rosalia Durante recalled. “…I enjoyed
hearing how the languages criss-crossed. … And they had to listen to a
Southern dialect from North Carolina.” 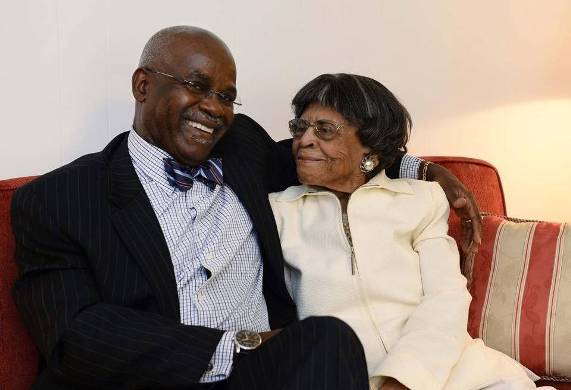 My name is Yele’

Nigerian names were distinctive and stuck in
her mind, Rosalia Durante said. It helped that she had asked her
students to print their names in large letters on construction paper.
For the first week, they held up their posters and announced themselves
so she could learn to spell and pronounce their names correctly.
“My
name is Yele Aluko,” she recalled him saying. He had bright, eager eyes
and a “zest for knowledge. … He was inquisitive. You didn’t have to
pull things out of him,” she said.
In 2011, Rosalia Durante read in the newspaper that Aluko was getting a lifetime achievement award from the Charlotte Post Foundation.
She mentioned it to her granddaughter, who arranged for them to attend.
During the ceremony, Aluko was surprised when organizers announced that
his primary school teacher was in the audience.
By then in her
90s, Rosalia Durante stood at her table and waved. Aluko walked over and
gave her a hug. She couldn’t hear well, but she had a keen memory of
that year when he was beginning to find his path in the world. He vowed
they would become more than just doctor and patient. They would be
friends.

Federal Government set to give 1 million poor Nigerians N20,000 each

‘With all my love’

He called her occasionally,
and this year, he arranged a visit to her home off Beatties Ford Road.
Aluko arrived with a bouquet of flowers. Rosalia Durante pulled a note
on white paper from her scrapbook.
It read: “To the teacher I will not forget. And to the teacher who has helped me with my lessons.”
Aluko recognized the tiny but clear and legible script – and thought how much better it was than his handwriting today.
He
did not remember writing this note at the end of sixth grade to thank
his American teacher. But she had saved it all these years. It had meant
that much to her.
It was signed: “With all my love. From Yele.”