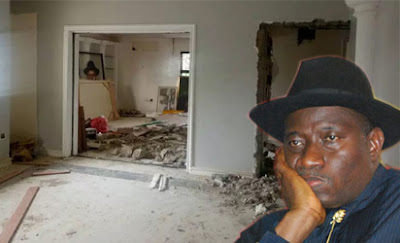 One of the three officers, Musa Musa, who was dismissed from the force for burgling
the house of the Former President, Dr. Goodluck Jonathan, has been
arraigned by the Federal Capital Territory Police Command, Abuja.

The dismissed officer who was a sergeant was among the three who burgled
Jonathan’s house at No. 89 Fourth Avenue, Gwarimpa district, Abuja and
stole items such as, sets of furniture, plasma television sets,
refrigerators, air-conditioner units and box-loads of clothes such as
designer suits imprinted with the former president’s name, male and
female Ijaw traditional attires, lace materials and bowler hats.

They were arraigned at a magistrate court in Wuse, Abuja.The magistrate
Mabel Segun-Bello, after hearing arguments by respective counsels,
granted Musa bail with a bond of N7 million.

“The law is clear about right to liberty. Bail is granted to allow the
accused attend trial. Where it is perceived that the accused may jump
bail, he may be denied,” the magistrate said. 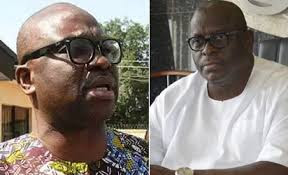 You Are A Blackleg In PDP- Fayose Comes For Kashamu,

The Ekiti State Governor, Ayodele Fayose, on Monday described the
senator representing Ogun East Senatorial District, Buruji Kashamu, as a
blackleg in the Peoples Democratic Party, who connived with others in
the Alli Modu Sheriff faction to destabilise the party for almost two
years.

The governor spoke at the meeting of the PDP leaders in the South-West,
which was attended by party bigwigs such as Iyiola Omisore, Bode George,
Gbenga Daniel, Ayo Adeseun, Hosea Agboola, Femi Babalola and Jelili
Adesiyan.

Apart from the PDP leaders, also in attendance at the meeting were
representatives of other political parties, including the candidate of
Accord Party for a senatorial seat in Oyo State, Femi Lanlehin; Labour
Party leader in the state, Sarafadeen Alli, and others.

Twenty delegates from each of the South-West states were invited for the meeting.

Nse Ikpe Etim: Why it is not a must for a Woman to have a child - Elsie Godwin

Just before it began, the Chairman of the PDP in the zone, Eddy Olafeso,
asked all uninvited members to vacate the venue as a communiqué would
be made available.

In a communiqué read at the end of the meeting, the zonal leaders of the
party condemned Kashamu’s role in the crisis that rocked the party,
calling for a disciplinary action against him over the party’s loss of
Ogun, Ondo and Edo states.

According to Fayose, the Supreme Court judgment did justice to Nigerians
and not only to the PDP because any democracy without opposition would
end up in autocracy.

He said, “Opposition holds the government of the day to their promises
for the benefits of the masses. That is the more reason you have to
stand up for something, otherwise, so many things will gang up against
you. Today, we are in the opposition and tomorrow we will be in
government.

“The history of my life is enough for me to know that if you fall, that
doesn’t mean that you cannot rise. Today, I am one of the strengths of
our party. This party must be protected because we are holding it in
trust for Nigerians. Most people do not know what to say because they
are frustrated, they are disturbed and there is nobody to help them.

“Most of us cannot give money to the masses and we cannot tar their
roads but when they hear the message you send to them every day, they
know that one day, hope will come for them.

“I am not one of the people who will tell the APC that it is a good
party. They are only deceiving you. The only thing they do is to see
that the PDP die ahead of 2019 but the average man on the street can see
and they can measure the difference. They cannot wait for electionS in
2019 to get rid of these people because they are tired of them.

“The crisis in the PDP started from Ogun State when they didn’t allow
Gbenga Daniel to succeed himself. We thought it was a joke; gradually
the monster started moving from one state to another.

“A blind man cannot lead us with money that has no source. How can a PDP
member be praising President Muhammadu Buhari and condemning Fayose? I
cannot blame him because his family has never produced a governor. Since
he went to the Senate, he has not spoken a word. I cannot be in a
marriage where the woman is meeting with another man. Buruji is a
blackleg in the PDP. He has done bad things to the party and we cannot
be with him again. How can he be asking for the party structure in the
South-West? I identify with Ogun stakeholders but not Buruji.”

The governor also said he was excluded from the list of governors that
visited Buhari in London because the organisers of the trip knew that he
would speak the truth about the President’s health.

The communiqué, which was read by Olafeso, called on PDP members in Ogun
State to stop all dealings with Kashamu and his agents until a
disciplinary measure was pronounced.

“The zonal leadership and stakeholders hereby reject any association
with Kashamu from this moment. It is hereby resolved that a special
committee be set up at the zonal and national levels to reach out to all
those who have left the party as a result of the disruptive activities
and sabotage by these characters,” the communiqué said in part. 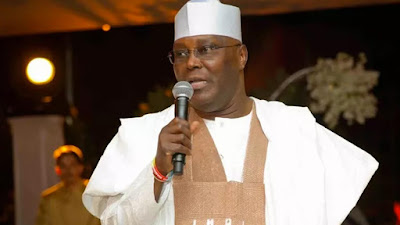 Atiku Asks FG To Arrest Those Behind Anti-Igbo Song

A former Vice-President and Chieftain of the ruling All Progressives
Congress,  Alhaji Atiku Abubakar, has urged the Federal Government to
fish out those behind a song disparaging people of Igbo extraction and ensure they are punished.

In a statement in Abuja yesterday, Atiku recalled that the Rwandan
genocide was ignited by a song, titled ‘I hate Hutus’, sung by a popular
musician, Simon Bikindi.

The former Vice-President called on men and women of goodwill to rise up against what he described as evil.

He said those who thought they could treat their fellow citizens
unjustly, through a song, should also know that there were mechanisms
within and outside Nigeria to ensure that they answer for their crimes.

The statement read in part, “It has come to my attention that a song
disparaging people of Igbo origin, and which wishes them dead, is
circulating in some parts of the nation.

“I totally and unequivocally condemn this development, and I call on all men of goodwill to rise up against this evil.

“This song is reminiscent of the beginnings of the Rwanda genocide.
Nigerians need to be aware that the Rwandan genocide was believed to
have been ignited by a song titled Nanga Abahutu (I hate Hutus), sung by
Rwanda’s then most popular musician, Simon Bikindi.”

A certain Sesan Sangodele, 30, was arraigned by the police before a
Senior Magistrates’ court sitting at Iyaganku, Ibadan, for stealing
three bags of rice and seven crates of eggs, all valued at N53,600.

The
prosecutor, Inspector Samad Aliu, told the court that Sangodele and hi
sagng, whom are now at large conspired to steal the bags of rice valued
at N48,000 and crates of eggs valued at N5,600 belonging to one Mrs.
Sekinat Sokunbi of Bodija area, Ibadan.

The offence according to Aliu was committed on July 27, at about 7:25am, at 6, Balogun St., Ilupeju area, Bodija, Ibadan.

The accused, pleaded “not guilty” to the two-count charge of conspiracy and stealing preferred against him.

The Senior Magistrate, Mrs Patricia Adetuyibi, granted the accused bail in the sum of N60,000, with two sureties in like sum.

She adjourned the case till Oct. 5, for hearing. (NAN)