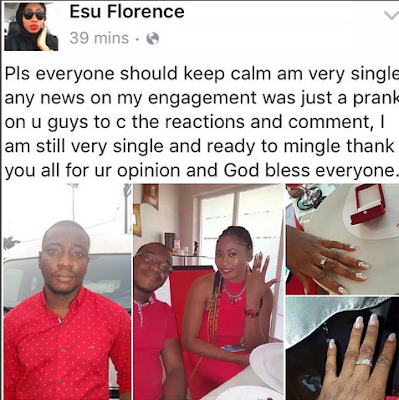 He was said to have areceived computer accessories, laptops and stationeries which were delivered to his business premises at Touchville Hotel, Ada George Road, Port Harcourt by the victim. After the supply, he issued a post dated UBA cheque of N1.165m with a further agreement to pay the balance of N150k on a later date.
.
But the cheque was returned unpaid due to insufficient funds in his account. All efforts made to recover the money by the victim, were futile. Justice Amadi adjourned the matter to 25th January, 2016 for hearing of bail application and ordered that Echefu be remanded in prison custody.
.
.
Echefu made national news last December after getting engaged to Florence Esu, a friend of his late wife, Cindy Nzeribe, barely 4 months after she died while pregnant with their 3rd child, and people berated him for not mourning his late wife, long enough. Anyway, after his arraignment yesterday, Esu announced that they’re no longer together.

This Psychiatrist has been sacked for recommending TB Joshua’s Emmanuel TV To ‘Possessed’ patient
Have you listened to the song AMAA’s founder, Peace Anyiam-Osigwe wrote for her late brother, Micheal?
To Top