Love is a living thing. Love is the reason for existence. When it finds you, you live more fruitfully.

To the kfbers that complain that we don’t feature Igbo weddings, this is for you :)….

Our couple of the week, Chidimma and Chidiebere, a Chemist/Engineer and
Physician had a beautiful cathedral wedding in Atlanta last September. They got the whole of Atlanta talking about their wedding.

Their beautiful lovestory kicked off at the groom’s grandmother’s funeral during christmas and got heated up with a home made cake.

The excited groom, narrated the love story below:

“At my late grandmother’s funeral in Mbaise Nigeria, my sister,
Nneka, was introduced to a man whose attendance I am now convinced was
divine providence. From what I gather, the gentleman, Mr. Joseph Eto,
had a daughter, Chidimma, who resided in Washington DC. Since Nneka
worked and schooled in DC as well, it made sense that they exchange
contacts.

Upon her return to DC, Nneka found her on Facebook, and then made
it a point that I be introduced to Chidimma. During my visit to the
East Coast, on Christmas Day, I contacted her. We exchanged digits, and
of course Nneka immediately sought bragging rights. We chatted quite a
bit actually. I must say, I felt as though we knew each other already
for some time. #Chemistry.

It was a smooth, animated conversation, filled with occasional
sarcasm, sincere laughter and interesting commonalities. We agreed to
meet that same day, before I left DC for western Massachussetts to visit
Prince and Bonita, my two other siblings.

It was a rather cold Christmas night. I drove to Baltimore and
met her at Seyi’s place. She greeted me at the door with full Eskimo
gear, boots, and a jacket that had me thinking I was not properly
dressed for the apartment’s weather. Chidimma led me up to Seyi’s place,
where the three of us chatted, watched TV, and then chatted some more.

She offered me some food that she had made. (Un)fortunately I was
stuffed from a previous party, so I took a rain check, but I did have
some of her homemade pumpkin dream cake. It was alright… ;). The very
next morning, I left DC. Every day since, we’ve spoken at least once a
day. Chidimma has captivated me in more ways than I could imagine. Her
innate humility, her inner beauty, and her joie-de-vivre lights up my
heart and gives me life.

I like to think that Christ graced the birth of our relationship
with His birthday. I pray that as long as He lives, His grace will
nurture and grow my love for her. Quite frankly I could not make up a
better story.” 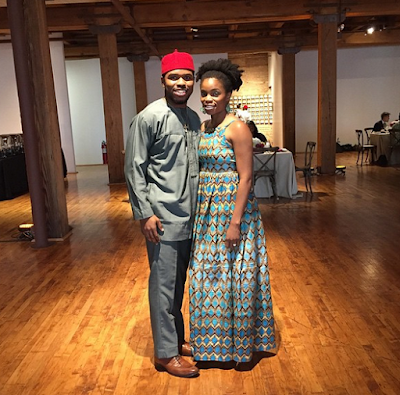 Their proposal story (as told by Chidinma)
Nearly two months after meeting Chidiebere, he
returned to DC to visit me! He and I surprisingly clicked immediately.
Every conversation intrigued me, and I wanted only to know more and more
about him. Thank God for FaceTime- we eventually used it daily to “see”
each other. But there’s nothing like the real thing.

I spent the entire week preparing for his arrival, and when I
showed up to the airport (a little late, smh), I couldn’t contain my
excitement! I hopped out of the car, and we embraced for the first time.
My heart jumped to my throat and skipped several beats, and then we got
in the car and headed to my place.

We talked and laughed the entire way home, like two long-lost
friends. As we walked to my apartment, he turned to me in the hallway,
and asked me to be his girlfriend. Before he could finish his question, I
was already saying yes. But in my mind, I was like, “YAASSSS!” The rest
of the weekend with this beautiful charismatic soul of a man was
amazing, to say the least.

We wish them a happy married life!

You don’t need a spouse, money….to be happy | Choosing happiness now
Who says Warri guys are not romantic | Ogaga &Ijeoma’s prewedding shoot will inspire you!
To Top