Though showing maturity in co-parenting after their divorce, it’s still puzzling why the marriage crashed.

Actress Lilian Esoro might have fallen out of love with husband Ubi Franklin, but she is definitely not calling him a deadbeat dad where their only son, Jayden is concerned.

Lilian who is already halfway through a divorce with Ubi could not hide her feelings on Monday morning as she celebrated her son’s 2nd birthday.

According to Lilian, she can’t comprehend how she did it with Ubi but they are raising a rare gem together.

Lilian’s marriage to Ubi went on a downward spiral barely a year after the union was sealed and all efforts to salvage the situation proved abortive. Apparently, she moved on with her life.

Despite the fall however, they have maintained a civil relationship where their son is concerned.

Below are first photos from the party

featured Lilian Esoro and Ubi Franklin
Share. Facebook Twitter Pinterest LinkedIn Tumblr WhatsApp Email
Previous ArticleSimi reacts as Adekunle Gold shares picture of him with a girl when he was a boy
Next Article See the question Bovi asked about the female Croatian president 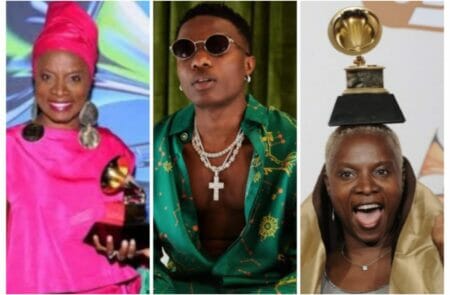 What does this woman even sing? Nigerians furiously attack Angelique Kidjo as she beats Wizkid to clinch the Grammy award