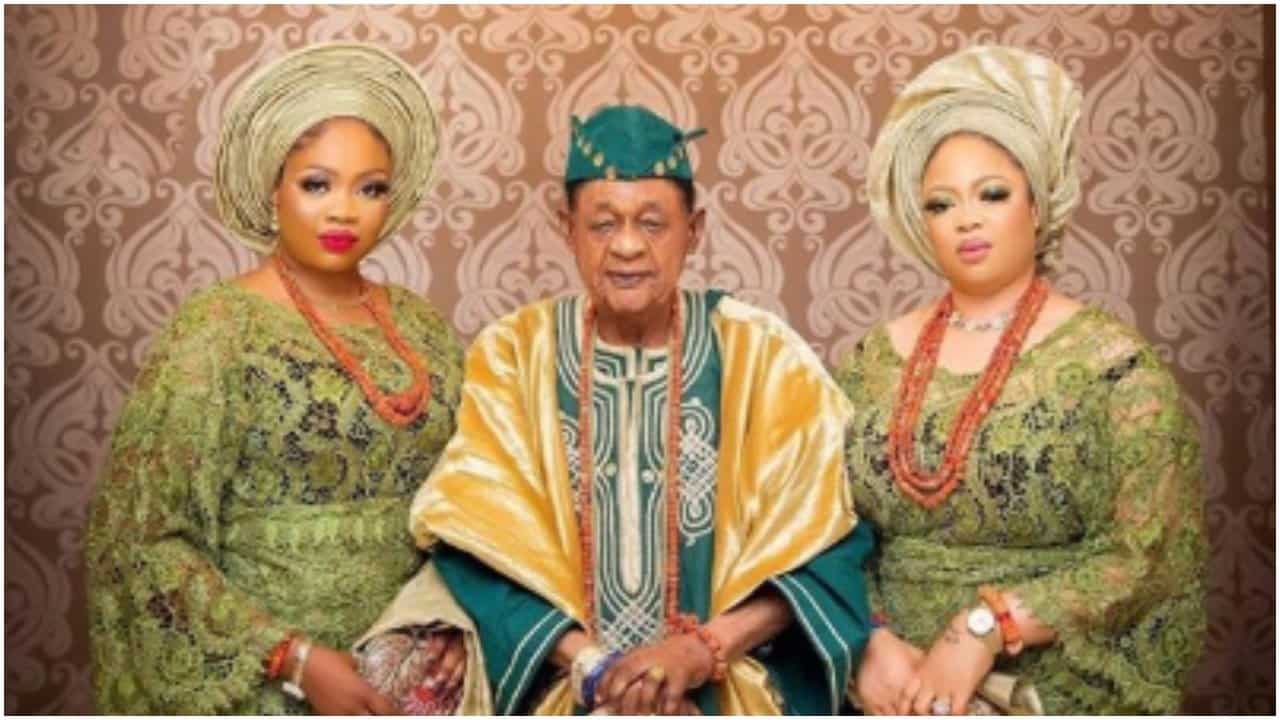 Ayaba Ashiat Folashade Adeyemi, one of the wives of the Alaafin of Oyo, Oba Lamidi Adeyemi, drew widespread attention in 2008 when she was delivered of a set of triplets to become arguably the first wife of a Yoruba monarch to be so endowed.

In this interesting chat with The Nation newspaper, she had this to say:

What was life like before you met the Alaafin?

I grew up in Sabo area of Oyo. Many things have changed now because of exposure and development. It was quite interesting growing up in that environment. I attended Stephen Alayande College of Education.

How did you meet him?

I met him for the first time when I was on an excursion to the palace. During the excursion, I asked him so many questions. Probably that was where he took interest in me. I requested to have an interview with him to know more and develop the project I was working on. I was just 25 years old then. We became familiar and he later proposed marriage.

What attracted you to the Alaafin?

He is wise and intelligent. Most times when he is not in the office or attending to visitors, he is in the library reading. He reads a lot and encourages us to read too. At times he would tell you to look for the meaning of a word; you will be surprised that he would tell you the meaning of that word as it is written in the dictionary or on Google. He is such a wonderful man. His depth of knowledge is unrivaled.

He is also a unique Yoruba monarch. He is popular and brilliant, and there is no place he cannot go as a Yoruba oba. Alaafin is the first among the Yoruba obas. The way he does his things are different.

How romantic is he?

Kabiyesi is very romantic. If you are not close to him, you won’t know that he is loving and kind. At times when I’m in the kitchen, he would come and offer to assist. While at the college, he would dish food for me and instruct the driver to bring it to school.

The difference in our age gap has not stopped him from showing affection. He shows affection more than some of these young men you see outside there. What a young man can do out there, Kabiyesi does better.

Were you afraid when you were coming into his home?

Yes, I was afraid. You know I was coming from a different background to join others. I didn’t know what I was going to meet or how others would react, and so many other questions were raging in my mind. But when I got into the palace, I discovered that my fears were unnecessary. The ayabas (queens) were very good to me. I got a warm reception. They taught me palace ethics, how to dress, how to combine colours, the rules and regulations of the palace and tradition. The ayabas were wonderful and friendly.

There was this widespread rumour recently of one of Alaafin’s wives’ alleged affair with popular Fuji musician, Alhaji Wasiu Ayinde (KWAM 1). How did the palace react to it?

The incident was quite unfortunate. All those things that you heard were mere fabrications. Such a thing never happened. They were all lies.

The birth of your triplets was highly celebrated in the palace. Why was it so significant?

Before giving birth to the triplets, I faced a lot of challenges. I waited for three years before they came. Their birth was significant for many reasons.

First, while looking up to God for children to come, I went to hajj in 2008 and prayed to God to give me twins, but in answering my prayer, He gave me triplets. Kabiyesi prefers that his wives give birth early. So, the three years I had waited, Allah compensated me with three children. Even if there was no delay, I couldn’t have had more than three children in those three years.

Secondly, I’m also the first queen in Yoruba land to give birth to triplets. Go and check history. I don’t know if any other wife of a Yoruba king will give birth to four tomorrow, but I’ve set a record. I know several wives of Yoruba monarchs with twins, but not triplets.

There are bound to be disagreements and quarrels between the queens in the palace. How do you cope with that?

There are bound to be disagreements since we all came from different backgrounds. But that has not been an issue. As soon as you are married into the palace, you are given rules and regulations. Any time there is a disagreement, it is settled. It does not go beyond that day. The Alaafin does not know about it, and because of that, he does not intervene. Even if he knew, the palace is so structured that the senior ayabas settle whatever disagreement the younger queens might have. The younger ayaba, irrespective of the nature of the disagreement, has to apologise to the senior one. The senior one too will apologise and things will return to normal. That has been the rule here, and it is working.

To say we don’t disagree will be a big lie. But while we may disagree sometimes, there is this bond among the ayabas. For example, when you are delivered of a baby, the palace mothers (senior ayabas) take care of them. You only go to see them when you want to breastfeed them. And when you are done with breastfeeding, you retire to your apartment. The senior ayabas are the ones taking care of the children. This has brought about unity in the palace. There is no place I don’t go to in the palace. There are no restrictions for me.

You are married to a polygamous husband. Would you allow your children to do same?

While I won’t encourage my children to engage in polygamy, only God knows the future from the present. After all, I never planned to be married into a polygamous home, yet I found myself there. God knows the best and I pray that God will direct them and order their steps. I don’t want them to be polygamists. But if that is what God wants for them, so be it.