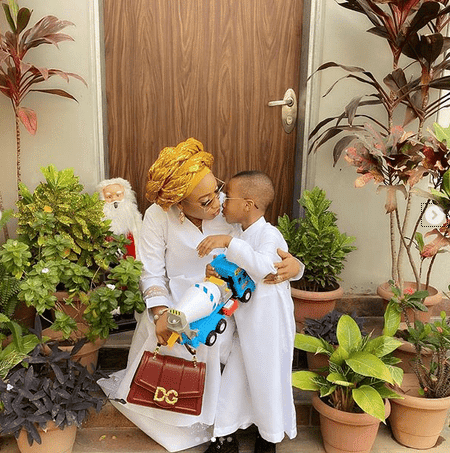 Weeks after being stuck in Dubai, Tonto Dikeh is finally back in Nigeria with her son and they stepped out to church together today!

Meanwhile the actress has turned a ‘preacher’ and has advised young people on how best to spend the New Year.

According to the actress whose passport has been allegedly seized by the Dubai police due to her detention and court trial in the oil rich country, there is the need to invest money in 2020 and not spend carelessly.

“As the new year begins, please be wise and strategic. Nothing is going to change because it’s a new year. Forget about the whole “new year new me” mantra, if you don’t change your ways, you’ll still get the same result.
.
Here are some nuggets to help you this year.
.
Stop comparing yourself with people and focus on your journey. It’s easy to stay in your corner and feel that the grass is greener at the other side, but the grass is greener where you water it. Focus on your journey, we all have our time. Don’t let people’s success pressurize you into looking for an easy way out.
.
Stop buying the latest phones, bags and material things when you lack investments. Many young people are caught up in material frivolities that they don’t even realize what matters. iPhone 11 is good, but how the heck do you not have any investment no matter how little bit you’re killing your self over buying an iPhone 11? Don’t try to look rich! Be rich and how do you get rich? By investing wisely!
.
Have friends with benefit!

Yes! Evaluate your friendships and kick out people you’re not also benefiting anything from. I’m not saying you should be a leech, but make friendships with the intentions to grow. Friends that only call you to drink and party? But never talk about how to grow mentally, and get better? Cut them off! You don’t need 1000 friends. One real friend is better than 20 casual friends.
.
Don’t start any relationship with “Let’s see as it goes…”
.
Define any relationship and know what you’re getting into, you can’t waste your time trying to see how it goes. It’s either they want you or not.
.
Finally, put God in everything you do. Remember that everyone won’t like you, everyone won’t help you, everyone won value you, but focus and trust God.
.
Cheers to a better 2020,” she wrote on Instagram.

Arrested and detained in a Dubai prison over six weeks ago when she was supposed to have attended the One Africa Music Fest and BamTeddy wedding, Tonto Dikeh was also charged to court but was later rescued from deportation/imprisonment by paying a fine.

Meanwhile, prior to the payment of fine in a Dubai court, Tonto who was granted bail, could not travel to Nigeria because her passport was seized and she had to report daily to the police in Dubai.
Though she has paid the fine through the help of the owner of One Africa Music Fest, Mr. Paulo, she isn’t allowed to return to Nigeria. She needs to clear her criminal case before her release.

Now with the return of her ‘best friend’, Idris Okuneye aka Bobrisky, to Nigeria a few weeks ago, its obvious the hyper active actress is stuck in Dubai.
The pretty actress has been trying to portray she’s vacationing in Dubai without her son. She is also trying hard to prove that she is enjoying herself.

Moreover, her estranged husband, Olakunle Churchill is set to drag her to court over the child’s custody.
“Churchill is going back to court over the custody of the child since Tonto is stuck in Dubai. He is angry that she has been taking money for the son’s upkeep and refused to comply with the court rules and order. In fact, he has taken another step and decided to open a trust fund account for his son. This way, the money would be judiciously spent on the child,” a source said.