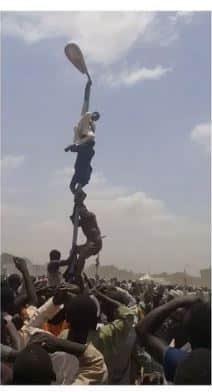 There was a rampage yesterday as a crowd of muslims hustled to climb a pole to touch the face of Sheik Inyass who “appeared”.

According to reports, during the Maulud celebration, yesterday, in Abuja, the face of the dead Sheik Ibrahim Inyass was said to have mysteriously appeared on a light bulb as lots of adults endlessly competed to touch the image in a bid to get a supposed blessing.

A fellow islamic brother who shared the reports on social media as he he and a couple of others in the same religion expressed their disappointments in the undane idolatory that the people in the video possess.

He added that if any one of them had died in the stampede, it would have been for nothing