Star actor, Babafemi Branch, who has been conferred with a chieftaincy title in Oyo State as Agun Asa of Edeland clocks another year today, May 14,2018

The actor who has the same birthday with his sister, was celebrated by friends and indegenes of the state as many put up his photographs on their social media platforms

The celebrant himself posted a photo of himself as he penned down a word of prayer in his language which read; 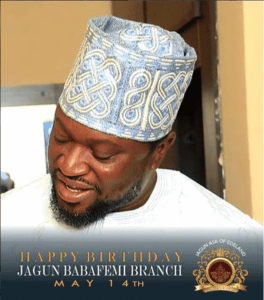