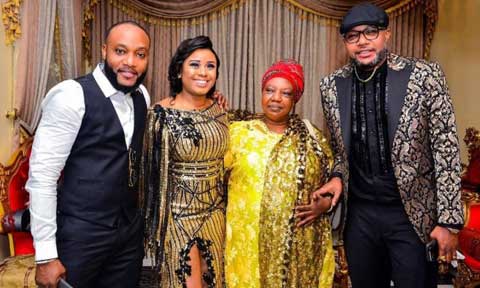 A rare picture of Emoney and kcee’s adorable mother has surfaced online.

The picture was unveiled by Emoney , CEO Five Star Entertainment who recently celebrated his 36th birthday.

Posting the pictures from his lavish birthday online, with his mum present to support her son, he added a special caption to the one he took with his beautiful mother.

When a lion is walking, every other animal goes into hiding because the king of the jungle is walking. Wherever you go today, because you carry the LION OF THE TRIBE OF JUDAH inside of you, every challenges, problems, & obstacles around you shall not only go into hiding but they shall disappear and melt away in Jesus Mighty name.Amen. Any forms of alligation enemy raised against you God will fight it to finish and you will win the battle in jesus mighty name Amen.Good morning and have a wonderful Thursday #mamakcee&emoney #mybloodline #birthdaypictures #it is too late to fail Amen #we are too loaded to be empty