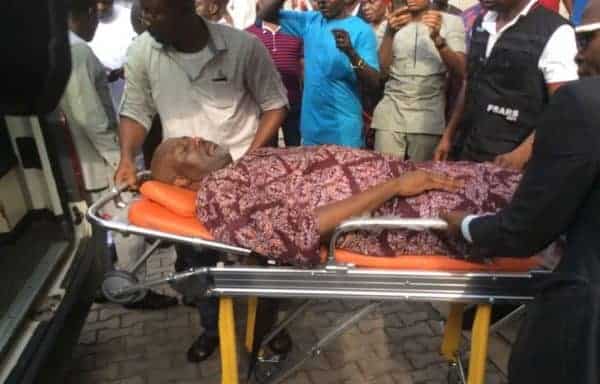 The presiding magistrate, Mabel Segun-Bello, granted him bail in the sum of N90m. But after the court granted Dino Melaye bail, he was re-arrested by the police.

Melaye’s lawyer, Mr. Nkem Okoro, told newsmen that Dino met the bail conditions granted by the court but the senator was re-arrested by the police on the court premises.

“He met his bail conditions but the police decided to re-arrest him on the excuse that they were taking him to Lokoja tomorrow morning,” Okoro said.

Dino was whisked away by a waiting ambulance that was accompanied by over 200 armed policemen in a convoy. 14 pick-up vans with an average of 10 policemen occupying each and seven 18-seater buses filled with policemen were in the convoy.

Melaye in a statement had denied his involvement in the political thuggery in Kogi state and called international bodies to assists in the investigation.

Read: See the pregnant woman rewarded with N1million by Okorocha for taking part in match pass