The dramatic Duchess of London was captured in a viral video leading his associates on a candlelight procession for the late Queen Elizabeth II.

Kemi Filani recalls that Queen Elizabeth II died on the 8th of September, 2022, at her Balmoral Estate in Scotland, shortly after concerns were raised about her deteriorating health.

A statement issued by Buckingham Palace confirmed the monarch’s death on Thursday evening.

“The Queen died peacefully at Balmoral this afternoon,” Buckingham Palace said in a statement.

“The King and The Queen Consort will remain at Balmoral this evening and return to London tomorrow.”

The viral video of James Brown’s candlelight procession with his associates has sparked drama on social media as many finally concluded that the crossdresser is not in his rightful sense.

While some find James Brown’s social media funny, many expressed displeasure with his dramatic mourning styles for the late queen.

Kemi Filani recalls that James Brown stirred the internet with his wailing and fainting skills a few hours after Queen Elizabeth II’s death.

James Brown shared a video of himself on his verified Instagram page, wailing as he mourns the death of his mentor. According to him, his heart is bleeding because the woman he looked up to had left him in this wicked world.

He wrote: “My heart is bleeding 💔💔💔 I can’t believe the woman I look up too is gone.

It’s painful 😣 that the woman I look up to and admire, the woman of Grace and Principles, has left me in this wicked world 😢 I’ll deeply miss you, my GODMOTHER QUEEN ELIZABETH THE 8th.”

Nigerians took to James Brown’s comment section to react to his dramatic way of mourning the Queen of England. He was fired online for his dramatic moves. 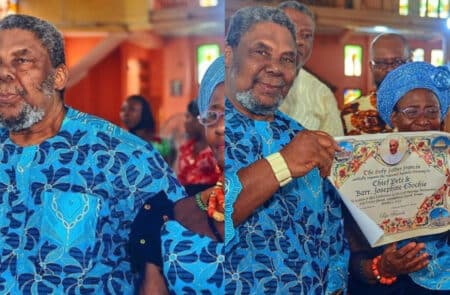