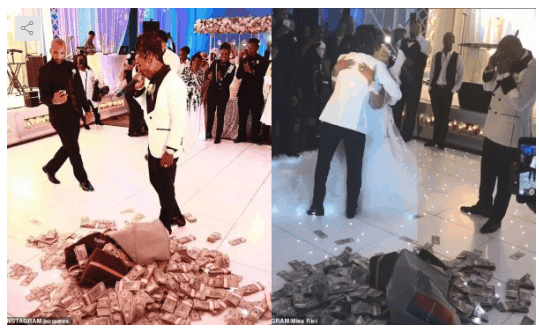 The mother of the musician is said to have gotten married on Sunday at the Chateau Elan, a luxury winery, and resort in Braselton, Georgia and was left excited as she received the monetary gift from her son

Kicking off with a lovely speech to appreciate his mother who stood on the dance floor next to the groom, Jacqueez told the guests that his mother was extremely special to him, and revealed that he wanted to ensure that she and her spouse up could walk comfortably into this new chapter of their lives.

He then proceeded to pull out two bags containing immense amounts of cash which he gifted to the newlyweds. Shortly after sharing his gift, the musician embraced his mother who was visibly emotional and her husband in an incredibly endearing moment.

Here is the video below;
https://www.instagram.com/p/BrMA1pEgWmy/?utm_source=ig_embed