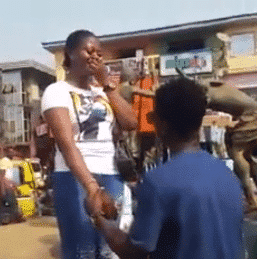 The proposal of an Anambra “big boy” to his girlfriend led to heavy traffic in the busy Eke-Awka market in Anambra state, and, honestly, it’s quite hilarious to watch.

Okoli Vincent Chinedu AKA Venom pulled a very public proposal surrounded by his friends and some homeless beggars.

In the video currently trending online, venom is seen with balloons walking towards the girl, whose name has been given as Nicole. On getting to the location, he is seen speaking to his love interest, but she seemed uninterested and kept turning away from him as he handed her the balloons. He eventually left the balloons to float then went on one knee to pop the question.

The woman turned away from him and started to walk away, probably because she was shy, but his friends stopped her and spoke to her. The man stood from his position then walked to her and knelt again. After a long while, the woman reluctantly stretched out her hand and the man slipped the ring on her finger. He then stood and tried to kiss her but she moved her face so his kiss landed on her cheek. He stopped trying to kiss her then hugged her instead but she kept her hand by her side, refusing to hug him back.

The man, whose trousers was way down his waist, seemed not to notice her reluctance and started jubilating with his friends. They popped a bottle of wine and poured on him. He then took off his top and changed into a t-shirt that had Hubby 01 written on the back. The girlfriend was also handed a white t-shirt with Wife 01 written on it which she didn’t seem too eager to wear. She wore it after much cajoling.

According to his brother who shared the proposal online, Venom, from Isiagu Amikwo in Awka, and Nicole have been together for 8 years and have a son together. The proposal took place on Jan 19, 2018.