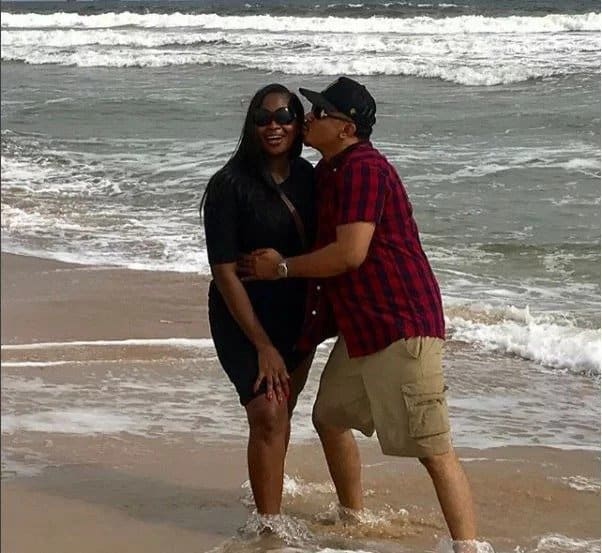 It is no longer news that media personality, Daddy Freeze and his estranged wife, Opeyemi Olarinde had a messy split in 2014 after 15 years of marriage. Freeze who claimed Opeyemi was violent alleged that she inflicted injuries on him at the time. Shortly after they parted ways in 2015, Freeze and Lagos big babe, Benedicta got engaged.

Benedicta, is from Awka in Anambra State and a graduate of Analytical Chemistry, from the Rivers State University of Science and Technology. This ambitious young lady entrepreneur was at that time making waves in Port Harcourt with her brainchild confectionary company called Dictachi Foods. While growing up, she claimed to be fascinated by the science and technology… Now, she is doing well with her catering and event job in Lagos.

In December 2017, Benedicta released a video of herself and Freeze on Instagram. In the video, they were seen cuddling and kissing and below the video she wrote: I thank the Lord for this wonderful man. He is, indeed a blessing to me. He’s my pillar of support and my best friend. In another video, Freeze and Benedicta also cuddled and Freeze wrote below the video: Daddy and Mummy Freeze; without this woman’s love and support, I can’t function. And sometimes ago, Freeze was seen on Instagram with a new born babe, a baby delivered to him by his new partner, Benedicta. Few years back there were rumours that Freeze had left his wife of 15 years and mother of his two kids for a Port Harcourt-based woman. However, after a long silence, the On Air Personality took to his Instagram page to post some photographs of how his estranged wife brutalised him. He also accused her of infidelity.

He captioned one of the photographs thus: “Another incident when my ex tried to strangle me! Do you want more pictures? I can go on for weeks posting such pictures. It used to be like this, at least, twice every month. Yet, my Pastor advised me to stay and that divorce is a sin….. After the separation, I realised that my life was far more important than the institution of marriage.

“Every moment spent with an abusive partner COULD BE YOUR LAST! Leave while you can! I have chosen not to speak up until now for my children’s sake. But when a woman believes she has been scorned because of a horrible past that was no fault of mine and transfers the aggression to me and is hell bent on destroying my very essence I must speak!

“I speak for every broken man, every battered man and every abused man, who is suffering endlessly and needlessly in the hands of a woman because of ‘marriage’ to gather the strength to speak now!

Benedicta Elechi who used to be married one Mr. Paul Odekina, the executive general manager of Human Resource at Total E&P Nigeria Limited, has now revealed why she left hm for OAP Freeze.