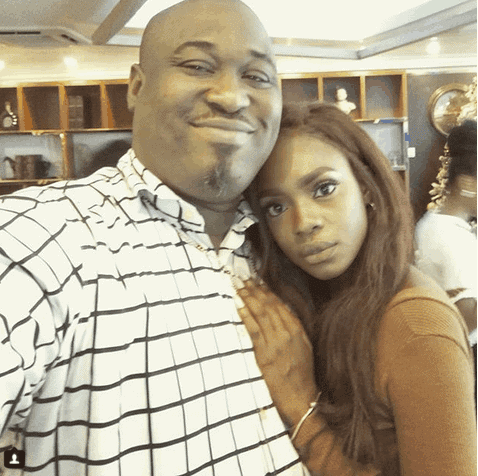 So yesterday, model, actress and former Big Brother Africa housemate, Beverly Osu made headlines after a photo of her ‘baby bump’ surfaced online after it was by her friend, Tolu Oduntan on Instagram.

Tolu. Oduntan broke the news on his Instagram, saying

And boom, the News was everywhere with many condemning and mocking the 25 year old.

Kemi Filani Blog reached out to her team and it was revealed that it was stunt.

“It is funny how the media is quick to hop on such News. We just wanted to pull a stunt and see how wild it will go and it went wild indeed. Beverly has announced that it is a joke on her snap chat but the media isn’t paying attention to that, what they care about is spreading the joke and she is loving the attention anyways..” the team exclusively told Kemi Filani Blog.

Last year, the 25year-old got everyone talking over an Instagram video of her and a Namibian friend, Maria Nepembe kissing each other on the lips.

From the clip, the Nigerian star admires her friend, tells her she is gorgeous and the duo proceeded to seal their friendship with a kiss on the lips.

Beverly who has never been afraid of controversies, however deleted the post from her social media after fans began talking about it.

She also dismissed rumours that she is a lesbian.

In an interview with Sunday Scoop, Osu stated that

“people would be commenting on issues they don’t have the facts of”.

“Ordinarily, I don’t even respond to things like this because I am way too busy for that.

“There are so many issues besetting this nation that we should be focused on instead of who Beverly kissed.

“If you must know though, the video I posted on Instagram was from a music video shoot. I have grown a thick skin towards these things.

“Many people would be commenting on issues that they don’t have the facts of and I find that very laughable”‎, she added.