BBNaija: A recap of what happened between Tboss, Soma, Uriel, others at the BBNaijaReunion 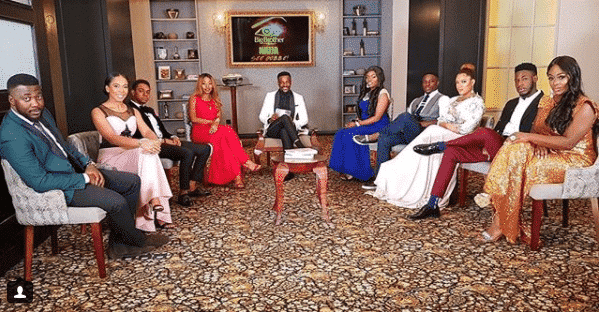 Here’s a quick recap of all that transpired between ex-housemates,Tboss, Soma, Uriel, Bisla, Miyonse and Bassey at The Big Brother Naija reunion show which began airing on Saturday on Africa Magic.

Tboss, ex-housemate of Big Brother Naija slammed Uriel for gossiping about her with other housemates outside the show.

The second runner up while speaking on the Big Brother Naija reunion show, complained about Uriel taking her story to other housemates.

On the other hand, Bisola revealed how she felt about TTT’ keeping his marriage away from her, Tboss put Uriel on blast for talking about her to other members of the house when she got out of the house.

‘He is such a fantastic actor, how did he hide that? I go on and on about my daughter, but I couldn’t understand how you could hide your family, it’s not like you are a single father, like me’, she said.

Another ex-housemate, Soma accused TBoss and Miyonse of making out when wrapped under the duvet.

However, Tboss denied the accusation, claiming nothing happened between them.

“Shut the f*ck up I never felt anything for Miyonse, only enjoyed his company,” Tboss lashed at Soma.