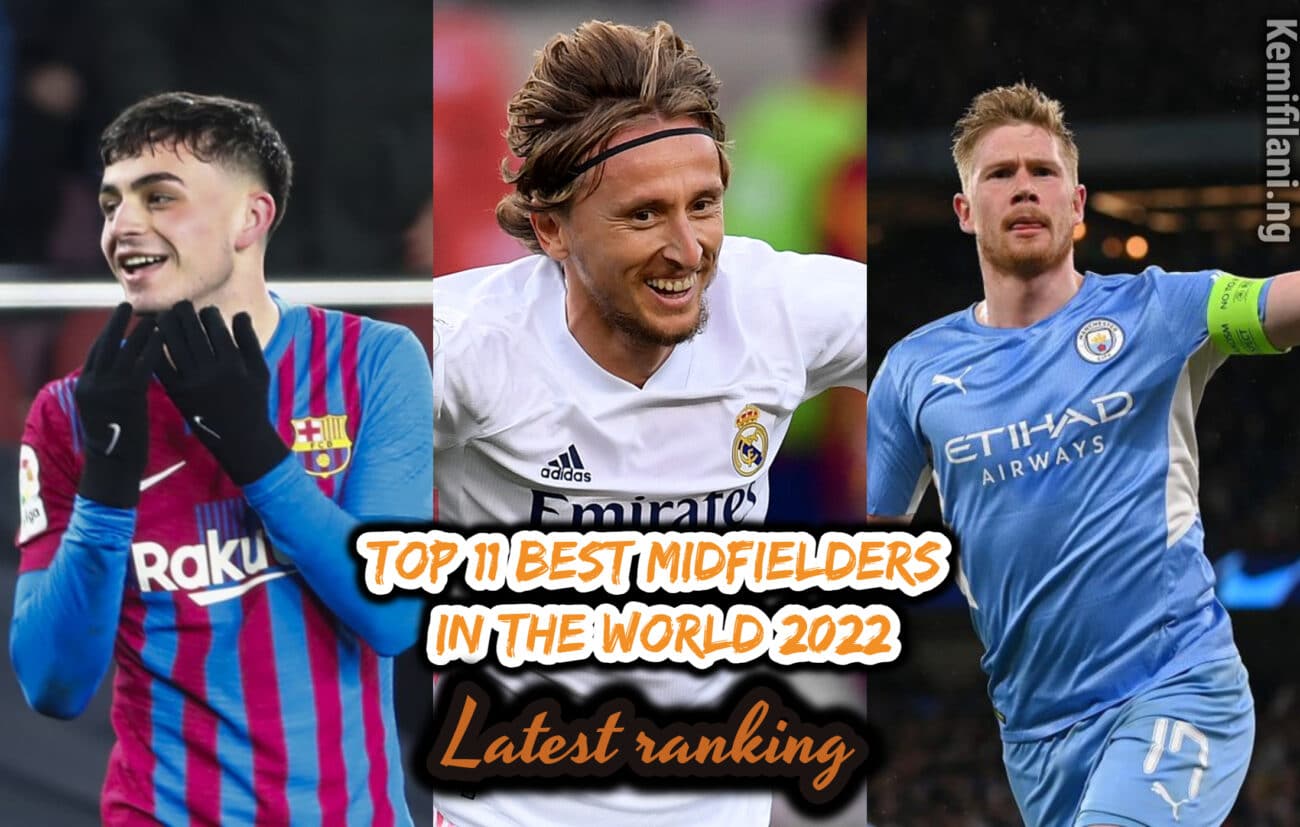 Midfielders can play in a variety of positions. They serve as a link between the defence and the attack. They can also play in the central, defensive, attacking, or flanking positions. So, who will be the world’s best midfielder in 2022?

Best midfielders in the world 2022

Sergej Milinkovic-Savic had a great last season for Lazio. He has been at Lazio since 2015, but under Maurizio Sarri, he plays on a completely different level. He can create goals, make assists, and also has defensive awareness. Last season, he made 34 interceptions and 40 clearances and had direct involvement in 22 goals in Serie A.

Joshua Kimmich has been outstanding for Bayern. His transition from full-back to defensive midfielder is exciting to watch.

Regarding the position he plays, he is one of the best. His defence is rock-solid, his creativity is exceptional, and he prefers to attack the field.

He is most likely one of the best players in the centre of the field. He has everything a team requires. Kimmich’s ability to play in any position other than midfield is one of his best qualities.

The German international is effective in all his positions, including defensive midfielder and full-back. He can win defensive possession, create chances for attackers, and do much more.

Kimmich is also skilled at man-marking and devising attacking plays. He is ranked number ten on our list of the top ten best midfielders in the world.

The Croatian international and former Ballon d’Or winner established himself as one of the world’s best midfielders.

His meteoric rise from Tottenham to Real Madrid is incredible. He is one of the club’s and country’s most influential players. He and Toni Kroos won every trophy a football fan could wish for.

When Real Madrid dominated the Champions League, the duo was the centre of attention. Modric employs his skills and passing ability to set up opportunities for the forwards. He can also dribble the ball well and finish well.

Modric is widely regarded as one of the best midfielders in history. Despite his age, he makes a significant contribution to the team. When compared to the other midfielders, his game understanding is unrivalled.

His presence on the field adds a lot to the team. Modric’s vision and ability to create chances are valuable assets to any team; he is a complete playmaker. He ranks ninth on our list of the top ten best midfielders in the world.

Ngolo Kante is one of Chelsea’s crown jewels. He is currently one of the best defensive midfielders in the league and a strong contender for UEFA’s best player award for his performance in the 20/21 season.

In 2017, he was also named PFA Player of the Year. N’golo Kante has been a Premier League fixture for the past two seasons. He is arguably one of Chelsea’s best players this season.

His outstanding performance in the UEFA Champions League assisted Chelsea in winning Europe’s most coveted prize. He excels at defense, acceleration, and creating opportunities. In this season, he is in the best shape of his life.

Kante’s performance is Chelsea’s standout performance in all competitions. Both defensively and offensively, the French internationals have succeeded.

Paul Pogba is a French footballer who currently plays for the Premier League club Manchester United and the France national team. He primarily plays as a central midfielder.

During his time in Italy, Pogba established himself as one of the world’s most promising young players, receiving the Golden Boy award in 2013 and the Bravo Award in 2014.

After helping Juventus to their first UEFA Champions League Final in 12 years, Pogba was named to the 2015 UEFA Team of the Year and the 2015 FIFA FIFPro World XI in 2016.

Bruno Fernandes is a well-known name in the world of football. He is one of the season’s best midfielders. It would not be incorrect to call him the next Paul Scholes.

He is unquestionably one of Manchester United’s best players this season.

Bruno excels at creative passing and attacking. He is one of the best at finishing and taking penalties.

His presence has an immediate effect on the red devils. In 58 games, he has 28 goals and 17 assists for 28 points.

The statistics are incredible for any midfielder in the world. His match-winning performance propelled him into the spotlight. Manchester United considers him to be the club’s future.

His presence on the field is extremely important to the club and the country. His passing and attacking intelligence are both crucial.

Bruno’s impactful performances and goal-scoring ability elevate him to the world’s best midfielders.

Marco Veratti is an Italian professional footballer who currently plays for Ligue 1 club Paris Saint-Germain and the Italy national team.

He is widely regarded as one of the world’s best midfielders. A playmaker who is astute, hardworking, and technically gifted.

Verratti began his career in 2008 with the Italian club Pescara, where he quickly became one of Europe’s best young midfielders.

Because of his passing ability, vision, and control, his playing style has drawn comparisons to Andrea Pirlo.

At the senior level, he made his Italy debut in 2012 and represented his country in the 2014 FIFA World Cup and the UEFA Euro 2020, which he won.

Jorginho is a professional footballer who plays for the Premier League club Chelsea and the Italy national team.

He is a defensive midfielder or a deep-lying playmaker in Italian football, also known as a regista.

He moved to Napoli in January 2014, where he quickly won the Coppa Italia and Supercoppa Italiana.

He appeared in 160 games for the club before joining Chelsea for £50 million in 2018, where he won the UEFA Europa League in his first season, followed by the UEFA Champions League in 2020-21.

Pedri is a professional Spanish footballer who plays as a central midfielder for Barcelona in La Liga and for the Spanish national team.

Pedri made an immediate impact in the global footballing world. Pedri demonstrated his abilities to Xavi and the rest of the world after joining the team as a reinforcement.

Pedri currently holds the Kopa Trophy for the best young player in the world and the Golden Boy for his outstanding season in Barcelona, the EURO, and the Olympic Games.

Barcelona’s young sensation is one of the world’s best young talents. He is one of the best midfielders in the world, despite being only 24 years old. He’s far too good at set pieces and creating chances.

The Dutchman’s ball control and composure are unquestionably impressive. For his qualities, he is highly regarded by club legend Xavi. He is unquestionably Barcelona’s next big thing.

Barcelona signed De Jong from Ajax in 2019, and he has been steadily improving since then. He has a long way to go, but he has been showing the world what he can do all season.

He shifted to another role under Ronald Koeman, and it appears he will be fired, as he previously played for Koeman’s national team.

He’s no longer just a midfielder who can play in the centre. Xavi has given him complete freedom to burst out while moving forward.

The Dutch international scored seven goals and assisted six more, and he continues to improve year after year. He is ranked second among the top ten best midfielders in the world.

Kevin De Bruyne is, without a doubt, this generation’s best midfielder. He is the complete midfielder in the history of the game.

He has it all in his game: skill, passing, dribbling, tackling, shooting, and creating opportunities.

His pass accuracy is unrivalled, and he is also one of the best finishers in front of the goal. With his style of play, the Belgian international contributes to almost every game.

He was Manchester City’s standout performer during the club’s record-breaking Premier League triumph in 2017/18. De Bruyne was also named Premier League player of the year for the 2019-2020 season.

De Bruyne has been one of Manchester City’s best players in recent seasons. His masterclass performance in all competitions has wowed everyone.