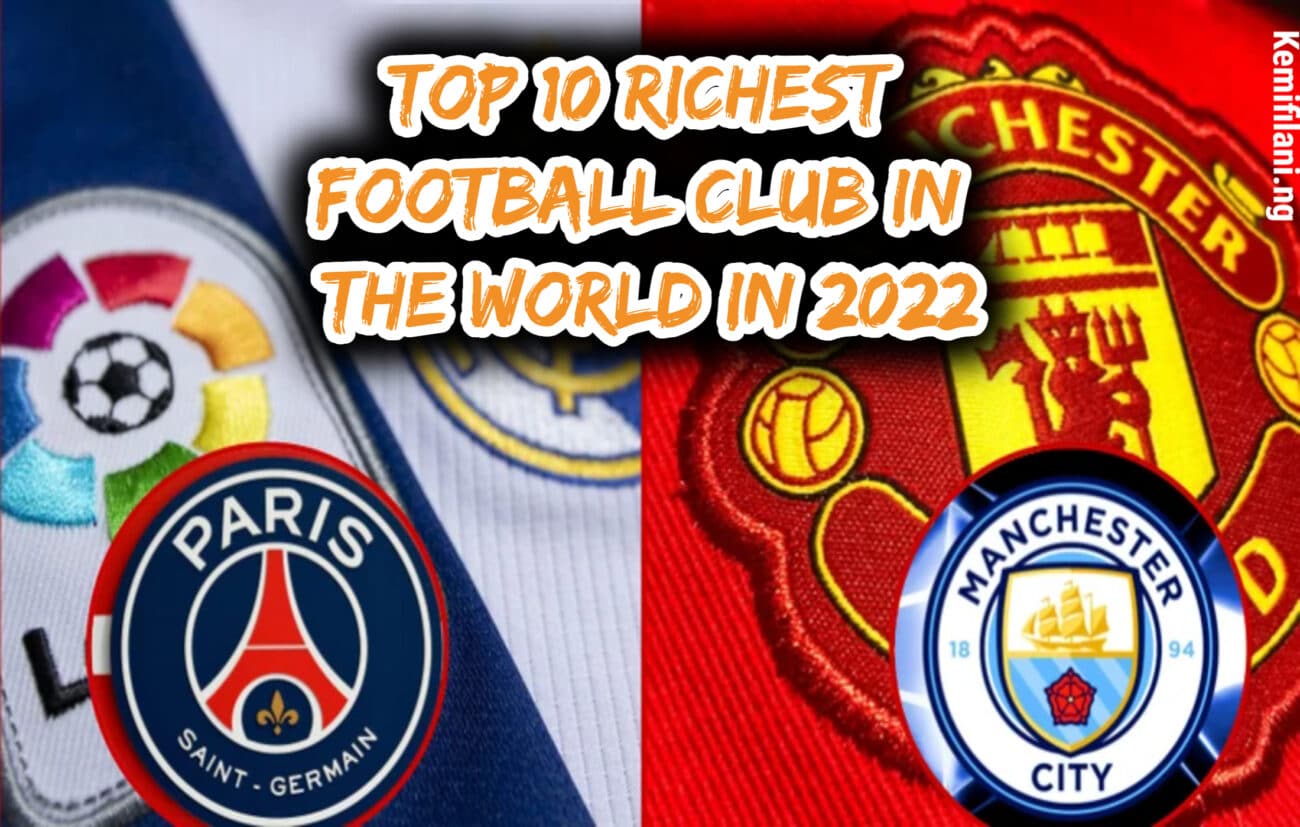 Which is the richest football club in the world in 2022?

Many soccer teams suffered financial losses during the Covid-19 pandemic. Following the lifting of the restrictions, the relevant authorities worked tirelessly to recover from the pandemic. Today, the major clubs are back on their feet and doing well.

Check out Forbes’ list of the top ten richest football clubs in the world in 2022;

Real Madrid, the 13-time European champions and one of the best-supported clubs in the world, generated more than $80 million than anyone else.

There will be no European glory in 2019 or 2020, but the Spanish superclub will benefit from a large portion of La Liga TV revenue.

Real Madrid is usually a foregone conclusion at the top of the world football revenue charts, but they fell to third in 2018, trailing Manchester United and Barcelona. Los Blancos are constantly linked to the biggest names, and it is uncommon for them to miss out on a player they desire.

Barcelona is a club in turmoil, at the center of an enormous transfer saga that did not involve Lionel Messi this offseason.

A Champions League defeat and failure to win La Liga have caused problems for their star player, but the Catalan giants continue to generate as much revenue as any non-Real Madrid club.

Large salaries to ageing stars have hampered Barcelona in recent years. Their squad management isn’t perfect, but they remain one of the world’s best and wealthiest teams.

There hasn’t been a league championship since 2013. Since then, they’ve been in and out of the Champions League. Manchester United is so powerful that they can weather a relative on-field disappointment.

Ed Woodward continues to find revenue in the most unusual sponsor partnerships – the club is a successful business, even if its fans are dissatisfied.

Bayern Munich, the German and European champions, come in fourth place on this list.

Bayern Munich isn’t known for the same flashy signings as the previous three, but they invest heavily in their squad and pay their players well.

Whereas Manchester United, Real Madrid, and Barcelona can appear chaotic and erratic in the transfer market, the Bavarian giants are calmer, carrying on with their business without the same fanfare.

Manchester City’s revenue has skyrocketed in recent years. They were ninth in the world in 2013 with $362 million and 16th in 2011 with $153 million. The trophies have followed the flood of investment.

Since Pep Guardiola’s arrival, beautiful football has been played in the light blue of Manchester City, and records continue to fall.

City, now one of the most powerful football clubs in the world, shows no signs of slowing down in its pursuit of the Champions League.

Paris Saint-Germain, another team desperate for success on the continental stage, came close to lifting the Champions League trophy in 2020 but was defeated by Bayern Munich in Lisbon.

The French champions have recently been more frugal with their spending, despite breaking numerous records to sign Kylian Mbappe and Neymar. PSG’s club value is only 11th, despite having the sixth-highest revenue.

Their standing in world football will improve significantly if/when they win their first Champions League, as Ligue 1 has become little more than a formality in recent years. In the coming months, PSG will be popular in expert betting tips.

Liverpool won the Champions League in 2019 and will be crowned English champions for the first time in three decades in 2020.

Always one of the richest clubs in the world, Liverpool’s revenues have been boosted by Jurgen Klopp’s consistent return to the Champions League.

The club’s owners have been cautious, declining to pay Timo Werner’s release clause and carefully managing the payroll of their Major League Baseball team, the Boston Red Sox. It will be interesting to see how much they spend in the coming years.

According to Forbes ‘ most recent list, Chelsea’s revenue increased thanks to the sale of Eden Hazard. Chelsea has grown commercially since Roman Abramovich purchased the club in 2003, and this trend is expected to continue.

Even in difficult seasons, the Blues have a knack for winning trophies, which brings in money and makes them an appealing option for sponsors.

Frank Lampard’s first season as a manager ended with the Blues qualifying for the Champions League once more, securing their place in the top 10 for 2020/21.

Arsenal has had disappointing league finishes during its turbulent history, but the club has continued to thrive financially. Their $520 million revenue is more than double that of Milan, another sleeping giant.

After the dark days of Unai Emery, the early days of Mikel Arteta’s era have brought hope back to the Emirates Stadium.

Tottenham and Daniel Levy are not known for lavish spending. On the other hand, a Champions League final run made the club a lot of money, and the Premier League’s monster TV deal vaults them into the top ten of revenue in world football.

They made $31 million more than Serie A champions Juventus and more than $100 million than Borussia Dortmund.

Spurs spent a lot of money on their new stadium, a cutting-edge dual-purpose facility that ranks among the best in the world. Jose Mourinho will demand a similar level of investment in the first team.