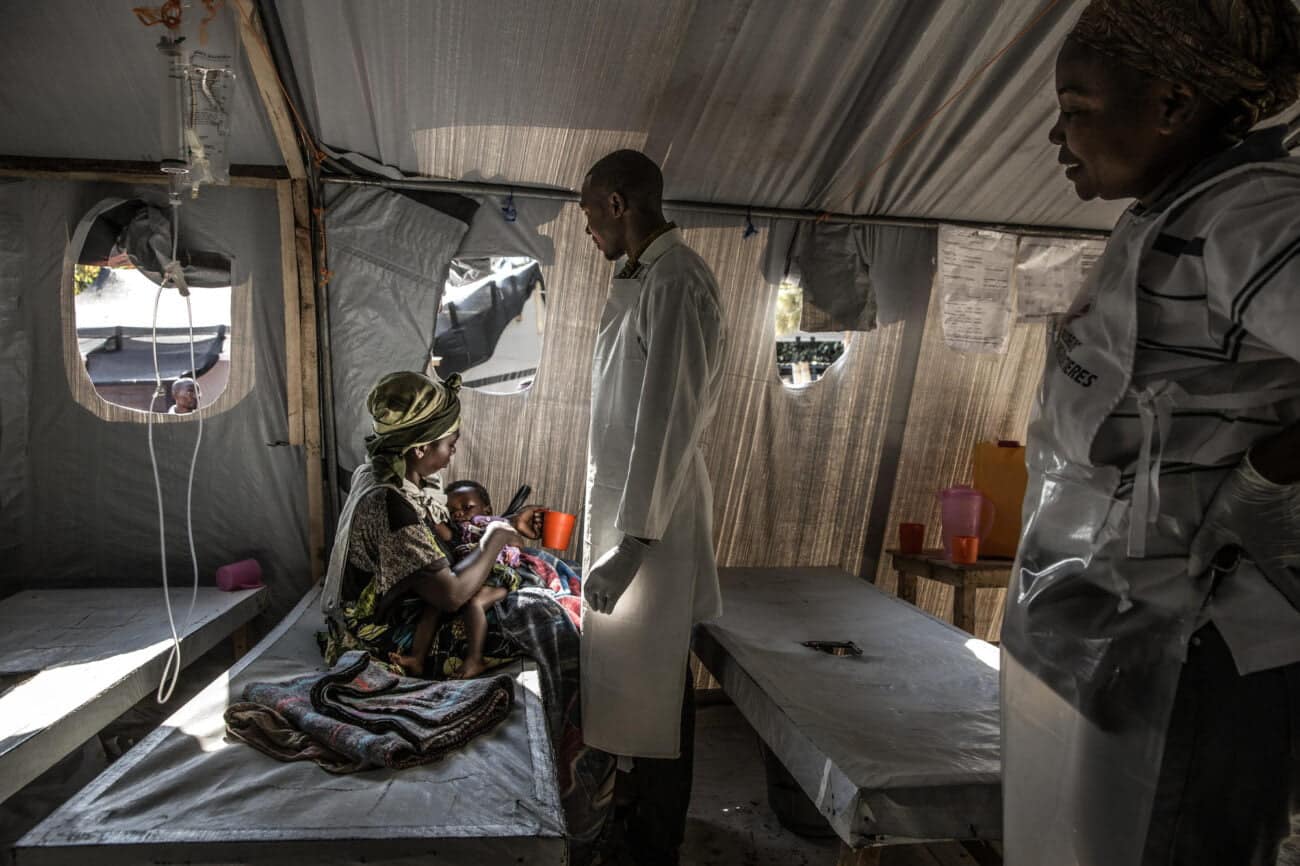 In the eastern Democratic Republic of the Congo’s Nyiragongo territory, the number of people suspected of having cholera has alarmingly increased in just the past 10 days, according to Médecins Sans Frontières (MSF).

143 patients under the age of five were among the 472 patients treated by Médecins Sans Frontières (MSF) teams between November 26 and December 11 at the cholera treatment facility in Munigi, a town not far from Goma.

Tens of thousands of individuals who were fleeing fighting with the M23 group have since the end of October joined those who had already been residing in camps for displaced individuals in Nyiragongo territory, a few kilometres north of Goma, the capital of North Kivu.

In addition to the host communities, more than 177,000 people are currently trapped in terrible conditions, at the mercy of bad weather and epidemics, making the humanitarian situation there worse.

“Given the lack of food, shelter, latrines and showers, all the ingredients are there for a health disaster,” says Simplice Ngar-One, MSF project coordinator. “The increase in cholera cases in recent days is another indicator of the deteriorating situation and the blatant lack of humanitarian assistance.”

“I fled my village with my six children and my husband a month ago and since then we have received almost no help,” says Nyira Safari, who is sitting with her daughter Zawadi in the MSF-supported Kanyaruchinya health centre.

“We have neither showers nor toilets. To feed my family, I go to the fields to try to find some potatoes, despite the risks involved,” says Nyira. “For two days, Zawadi has been suffering from diarrhoea and vomiting. She was very weak and could barely stand. That’s why I came here.”

Eight-year-old Zawadi is one of the patients with suspected cholera who come to MSF’s supported facilities in Munigi and Kanyaruchinya, two places where many displaced people have made their homes.

“What we feared is happening: the number of people with suspected cases of cholera is increasing due to the dismal living conditions, including increased proximity with other people, in informal settlements,” says Dr Alain Bishikwabo Irenge, medical officer in charge of the cholera treatment centre in Munigi.

“We have set up two additional tents to accommodate the large number of patients and increase our capacity to 100 beds,” says Dr Bishikwabo Irenge. “We will also intensify community activities to raise awareness and ensure early detection, as too many patients arrive in an already severe state of dehydration.”

Visible consequences of the lack of assistance

“Since July, we have been warning about the health risks, including epidemics, for displaced communities in Nyiragongo territory,” says Ngar-One. “New massive displacements of people since the end of October have exacerbated an already extremely precarious situation.”

“Massive displacements of people since the end of October have exacerbated an already extremely precarious situation… Despite our repeated calls, the current humanitarian response is far from adequate.

“Months after people arrive in sites for the displaced, they still lack the most basic things. Some people are sleeping on the ground, under mosquito nets, along the road. There are not enough sanitation facilities, including toilets and showers.

“Here at the Kanyaruchinya health centre, we have dozens of patients coming in every day with diarrhoea, respiratory issues and skin infections,” says Ngar-One. “With the teams from the Ministry of Health, we treat the visible consequences of the lack of humanitarian aid.

“Despite our repeated calls, the current humanitarian response is far from adequate,” says Ngar-One. “That is just not understandable, as these people are only a few kilometres from Goma, home to many humanitarian organisations.”

“Since the beginning of November, a teams have offered an average of 250 free consultations per day at the Kanyaruchinya health centre. An advanced health post will soon be established at the unofficial Munigi location known as Bassin du Congo.

“Additionally, we have installed hand-washing stations, are continuing to provide water at six locations in Kanyaruchinya and Munigi, and are engaging in a variety of awareness-raising activities. SIMPLICE NGAR-ONE, MSF PROJECT COORDINATOR IN DRC

Cholera displaced persons MSF precarious conditions
Previous Article“For me, Kylian is the best”- Aurelien Tchouameni ahead of France vs Argentina clash
Next Article NGX closes on positive note with market cap up N133bn