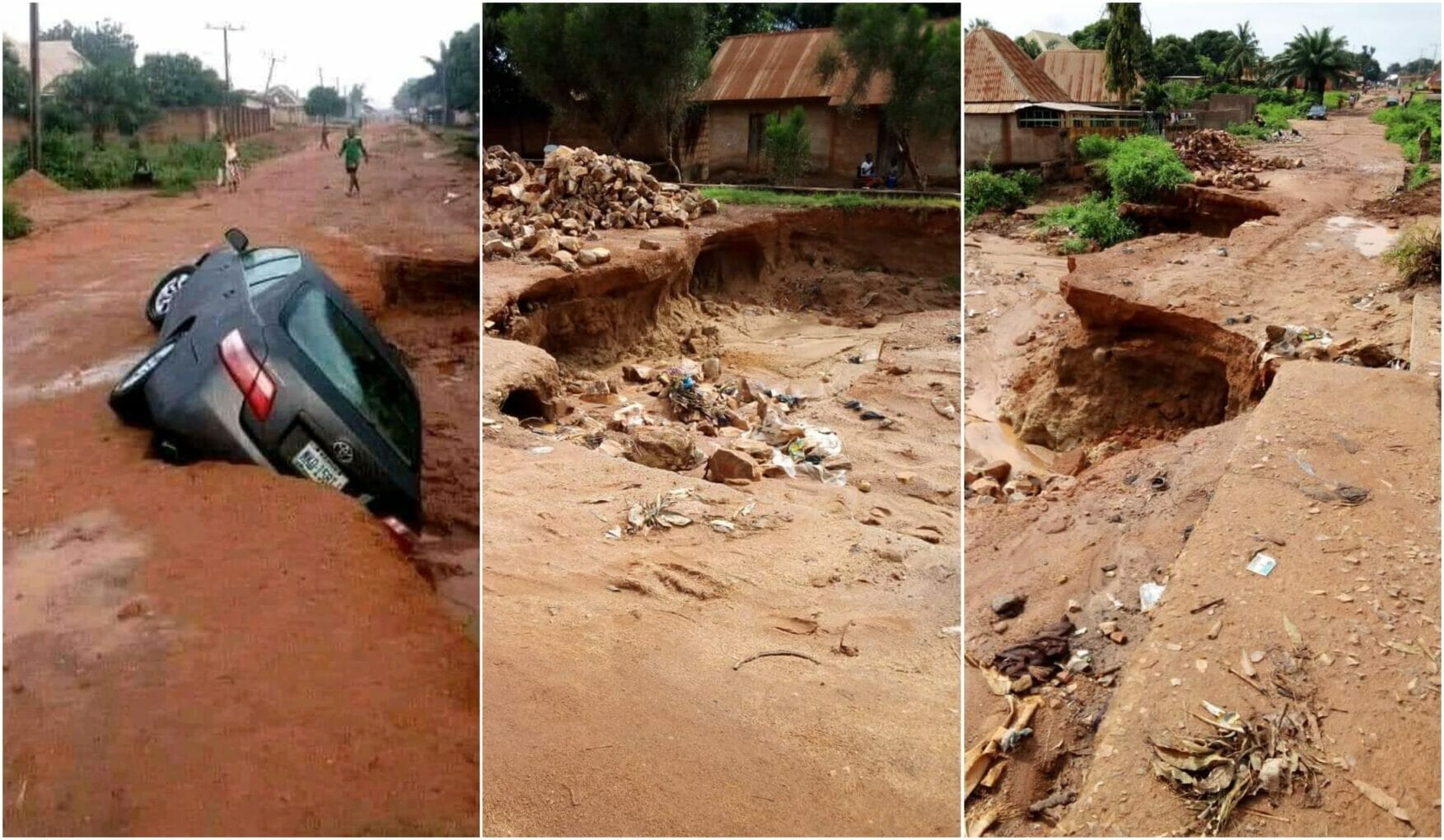 Water, the late afrobeat legend Fela said has no “enemy”. But that may not be the case with the residents of Federal Low-Cost Estate in Gboko town of Benue State whose only access road was ruthlessly washed away by rainwater recently, right now.

The Federal Low-Cost Road (former Clinic Road) is the main road leading to Federal Low-Cost Estate and its environs which are parts of what form the heartbeat and commercial nerve centre of Gboko, the second largest town in Benue State (after Makurdi, the state capital), and the metropolitan capital city of the Tiv Nation. Many prominent people ply this route to their houses and business places, among whom are; the Ter Gboko, HRH Gabriel Shosom, Mrs Agaigbe (member Benue State House of Assembly), Dr. Antyo Joseph (PSA to the Governor ), Mr. Silas Anjie (SSA to the Governor), and many more.

With the road now unmotorable, economic activities in the area had taken a downturn. A situation that has made life uneasy for both residents and business owners in the area.

Some of them who spoke to our correspondent decried the sorry state of the road and lamented its adverse effects on their lives and businesses.

Jafa’ar Ibn Sarwuan, a resident of the area said he has stopped plying the road due to its malignant state.

A business owner in the area, Solomon Terver, who runs a hotel told our correspondent that the deplorable state of the road has greatly affected his business.

He lamented that the journey from the main road to his hotel which used to take less than 10 minutes, now take customers kilometres using alternative routes.

“The road (Federal Low-Cost road) is in bad condition. You cannot pass the road to people that reside within the area now, unless through a motorcycle. Cars cannot pass through that way now. Except they use another way to gain access to the area which is not easy. You need more than a kilometre to get to the area using alternative routes, something that would ordinarily take less than ten minutes using the road that was washed away by the rain,” Terver told KemiFilaniNews correspondent.

Krayzie-Tee Atu, a Makurdi based music artist and a regular customer of Mr. Terver’s hotel, explained that the present condition of the road may force him to think twice before coming next time.

“If nothing is done about the road, I’m afraid I will be forced to stop patronizing this place,” he said.

Expressing her dismay at the horrible condition of the road, Madam Shima, a resident of the area and a housewife, said she was particularly worried about how to take her children to school since the road is no longer motorable for the school buses.

“With schools now resuming, the present state of the road will force our children to trek for miles before getting to the main road to board their school vehicle. This will affect their punctuality.
Also, personally, the deplorable state of the road has put me out of business. The government should please come to our rescue by fixing the road,” she said.

Sowore: We were given N1m not to protest - Adeyanju

Another resident of the area, Haaga Clement, wondered why such an important road in the town should still be plagued by such nightmarish conditions despite claims by the Governor Samuel Ortom administration to have given Gboko town the needed attention.

“Gboko is not supposed to be plagued by this kind deathtrap (the deplorable state of the road) since we were told Gboko has been given the needed attention,” he said.

The Governor Samuel Ortom-led administration in Benue State has repeatedly claimed that it has given Gboko “the needed attention” since it commissioned few roads like the Aper Aku road, JS Tarka way, in the town sometimes this year during the official commissioning of the new Tor Tiv palace.

However, a visit to the town by our correspondent shows the otherwise of this claim.

Gboko is still so much suffering from an infrastructural deficit. The roads and streets are nothing to write home about.

BBNaija 2021: Yousef bags endorsement deal with a clothing line in Germany while in the show

Big Brother Naija Season six shine ya eye housemate, Yousef has bagged an endorsement deal with a clothing line in Germany while still in the live show.

KemifilaniNews recalls that Yousef is among the five housemates nominated for the week's eviction. Although, he seemed weak but has managed to conquer several previous evictions.

In a press statement shared on his official handle yesterday, the management of a top clothing brand in Nigeria and Germany has just made Yousef their topmost recognised model after signing a deal with the management of Yousef.

The decision came from the brand's CEO, Blessing Jiwul who perceived the housemate to be useful to her brand taking into consideration his intellectual instinct and organised mode of dressing.