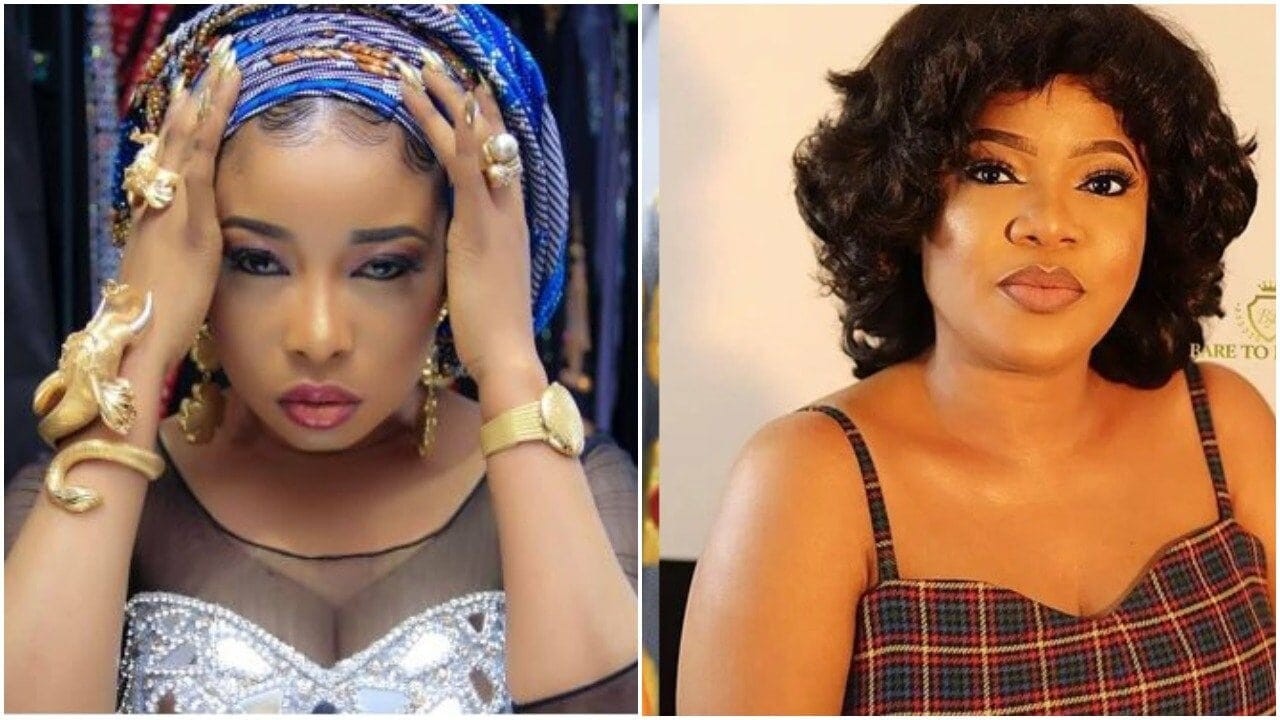 Contrary to reports that she did not wish Toyin Abraham well on the arrival of her son, Ire in 2019, beautiful actress and rich business woman, Lizzy Anjorin who recently welcomed her own baby in the US, has revealed that she actually prayed for the latter immediately she heard the News.

This is coming after some trolls, “believed to be fake accounts opened by Toyin Abraham”, attacked Lizzy Anjorin on social media on the arrival of her baby and for revealing the location of birth as Miami, Florida in the USA.

Notwithstanding the video evidence, Lizzy Anjorin insisted that Toyin Abraham gave birth to her child in a traditional center. On welcoming her own baby in the US recently, some trolls began attacking her.

Well, in an exclusive chat with Kemi Filani, new mum, Lizzy Anjorin responded and disclosed how much she loved Toyin despite the evil she mete out to her.

“…Is it possible for a sane person to claim that some one gave birth in a traditional home without having prove of it or for no just cause? There is more beneath the eye to this issue with Toyin Abraham but I won’t spill yet…but i have my evidence and facts….

When I heard she had given birth, I was in Mecca and I thanked God for the delivery and prayed to God to keep her and the baby….I told God that if I didn’t truly wish her well as the world claimed because I didn’t put post on social media to congratulate her, then may it not be well with me…but because God saw my pure heart, he blessed me in return. He gave me my amazing husband and now I’m nursing our own baby too…..It is funny how she is using fake Instagram accounts to troll me for welcoming my own baby.”

Spilling further, Lizzy Anjorin recounted the cease and desist notice she got from Toyin Abraham‘s Lawyer for false accusation.

“Have you not wondered why she didn’t take the case further, she couldn’t because of my evidences and it had to be settled by police PRO, Dolapo Badmus, hence reason why she kept quiet….I am nursing my baby and God has shamed those who wrote me off….”

Moving on, the actress prayed for her followers, fans and colleagues on Instagram who have congratulated her on the arrival of her baby.

“EVEN IN LABOUR ROOM THE STRUGGLE CONTINUES.

THE WORLD WILL CELEBRATE & CONGRATULATE YOU ALL BEFORE THE END OF THIS YEAR.

A statement signed by the Attorney-General of Lagos State Moyosore Onigbanjo (SAN) on Tuesday has revealed that a prima-facie case has been established against the embattled actor.

“After due consideration of the facts in the case file, the Lagos State Directorate of Public Prosecution (DPP) issued legal advice on the 4th of May, 2021, to the effect that a prima-facie case has been disclosed against Mr Olanrewaju James, and recommended he be charged under the following provisions of the Criminal Law of Lagos State, 2015:

Islamic cleric, Sheikh Ahmad Gumi, has called on the federal government to pay the N100million ransom demanded by abductors of Greenfield University students, to prevent the situation from degenerating further.

Gumi also insisted on Tuesday, that Boko Haram was responsible for the kidnap and not bandits.

Acccording to PUNCH, Gumi lamented that his efforts, which had been yielding fruits, were not being appreciated by the government.

The cleric advised that the money be paid by the Central Bank and later recovered from the kidnappers since it will be too large for them to run away with.

His words: “The money they are asking for is too much; if I give you that money, you cannot run away with it. Nobody can run. So,...

Nollywood actress Toyin Abraham has taken to social media to lament bitterly over what her son, IreOluwa did to her.

The actress who recently announced she back on social media took to the microblogging platform stating that children will disgrace you with a crying emoji.

This comes after the Nollywood actress and her husband Kolawole Ajeyemi engaged their son, IreOluwa, in a fun game where they stood with him and thereafter ran in the opposite direction.

To the surprise of Toyin Abraham, her son ran in the direction of her husband even when they repeated the game. The actress who seemed pained is heard calling the son 'Ire come commu, and I'm the one that gave birth to you'.