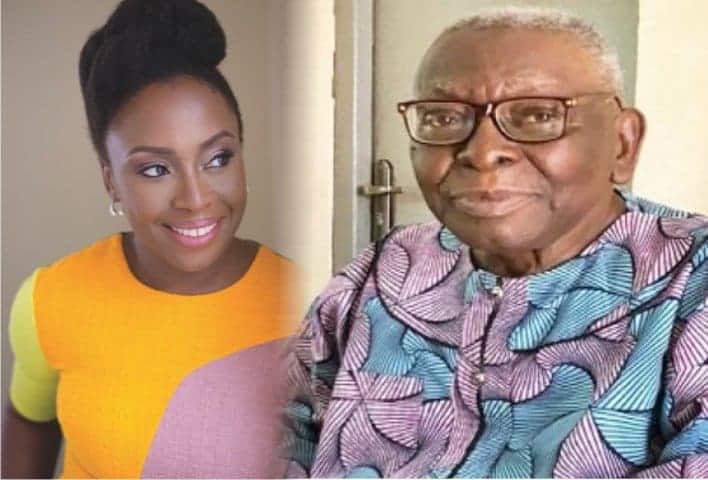 The remains of Grace Ifeoma Adichie, the late first female Registrar of the University of Nigeria, Nsukka , and mother of author, Chimamanda Ngozi Adichie, has been laid to rest in her hometown Abba, Njikoka Local Government Area of Anambra State, on Saturday, May 1.

Chimamanda’s husband, Ivara Esege, was present to show support and pay his last homage to his mother-in-law.

Kemi Filani will recall that few days ago, the world famous writer and motivational speaker was left devastated after losing her mum, Grace Ifeoma Adichie, just a few months after losing her dad.

“How Does A Heart Break Twice?,” she captioned her Instagram post, which included two pictures of her and her mum, as well as a heartfelt letter.
Paying tribute to her mum, she described her as a “warm, loving, funny, kind, and quick-witted, beautiful mother. Unconditional supporter and cheerleader of her children, fun and funny, source of delicious sarcasm, style icon, so sharply observant she never missed a thing.”

She wrote of how her mother became ill and died on March 1st, her late dad’s birthday.

Celebrity stylist Toyin Lawani has planned a tremendous surprise gift for her daughter as she turns a year older.

The fashion goddess who recently lost her father took to her Instagram page to share a video of the multimillion Naira Limousine she bought for her daughter on the occasion of her 16th birthday.

According to Toyin Lawani, she is eager to see the smile on her daughter's face while receiving the gift.

She captioned the post: Planned this surprise for my baby @therealtiannah , Today is her 16th Birthday main party and they are off to the location, can’t wait to see the smile on her face.

Reacting social media users gush over the gift as they hailed her for being a...

Iyabo Ojo reacts to released videos of herself and Baba Ijesha

Veteran actress Iyabo Ojo has taken to social media to express disregards for fans digging up videos of her and Baba Ijesha in some past movies.

In a video she posted on instagram, she said, she has no business with anyone digging up videos as her interest is for justice to be served accordingly.

She wrote: "Awon digger isonu ...dig on jare nothing do una ….

That innocent girl will get justice & that's on a periodt"

some of her fans reacted to the video;

@Rhey said: "We are our problem in this country get too distracted easily with stupid news then forget the main issue on ground....Justice must prevail for that young girl"

Netizens react to the arrival of Lizzy Anjorin’s baby

Netizens have reacted to the news on the arrival of Lizzy Anjorin's baby with her husband while recounting her feud with Toyin Abraham.

It is no longer news that the relationship of Toyin Abraham and Lizzy Anjorin is like that of a cat and dog, and this became obvious after Lizzy refused to congratulate Toyin on the arrival of her baby.

Lizzy consistently bashed Toyin after the birth of her baby While insisting that she gave birth in a traditional home, urging her to stop forcing her lies on her fans.

Lizzy also accused Toyin of Trolling her with various Instagram accounts and hurling insults at her as she pretends to be her fan, a claim that Toyin filed for a defamatory suit against Lizzy.