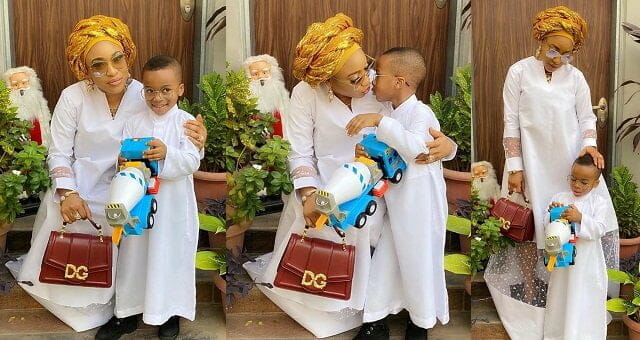 Nollywood actress and philanthropist Tonto Dikeh has expressed how concern and keen she is about the future of her son, King Andre.

In a post shared on her Instagram page, the actress advises parents to ensure they work hard to give their children a better life so that they don’t have to worry about breaking generational curses while growing up.

According to Tonto Dikeh, whose love for her son is undying, everything about her life is geared towards giving her son a good life, including her son’s children.

She wrote: Do the work, so our children don’t have to worry about breaking generational curses
THIS IS ALL I LIVE FOR.. THE FUTURE OF MY CHILD AND HIS CHILDREN.

Kemifilani recalls that Tonto Dikeh recently bragged about having multiple income streams and being the best thing that Nigeria could ever have.

In a post shared on her Instagram page, the actress said nothing is more beautiful than an extremely successful woman.

According to Tonto Dikeh, she often admires herself in the mirror and brags that Nigeria is lucky to have her. Captioning the post, she wrote:

There is nothing more beautiful than an extremely success woman. AND NOTHING MORE BEAUTIFUL WHEN SHE WORKED REALLY HARD FOR IT..
I just looked at Myself in The mirror..
NIGERIA YOU’SO LUCKY TO HAVE ME🌹
In all you do leave ROOM FOR GROWTH
MULTIPLE STREAMS OF INCOME IS THE NEW SLAY

Nollywood actress Regina Daniels is currently battling for her life and has been hospitalised in an undisclosed hospital.

This comes a few weeks after the actress took to social media to solicit prayers from her fans as she embarks on surgery in Dubai.

Taking to her Instagram story, the actress shared a photo of her hand-tied with a bandage and saying she's currently down in health.

She wrote: Man down.

Reacting, some social media users prayed for the actress.

sandybabe344 wrote: Get well soon 😢sickness is no joke

Sharing an adorable photo of herself on Instagram, Nkechi Blessing urged her critics to go on their knee's and ask for God's grace instead of envying God's grace in her life or other people.

According to Nkechi Blessing, some people, including herself, are God's favourite, and He's not leaving them anytime soon.

Amidst the ongoing rift between Nollywood actress Toyin Abrahan and her colleague Lizzy Anjorin, the latter has revealed how she felt at the arrival of her baby, IreOluwa.

Kemifilani recalled that Toyin Abraham recently addressed the issue with Lizzy after months of silence and ignoring the actress.

According to Toyin, she needs to address the issue with Lizzy Anjorin because her son and husband have been dragged into it, and she needs to protect her child.

In a new post shared on her Instagram page, Toyin Abraham revealed that the birth of her son added so much joy and happiness to her life which inspired the creation of the phenomenal 'IRE' game.

According to Toyin, mothers should not relent their strive to...

Weeks after undergoing surgery, Regina Daniels hospitalized, battling for her life
DJ Cuppy admits that all she is enjoying is her father’s blood, sweat and tears
To Top