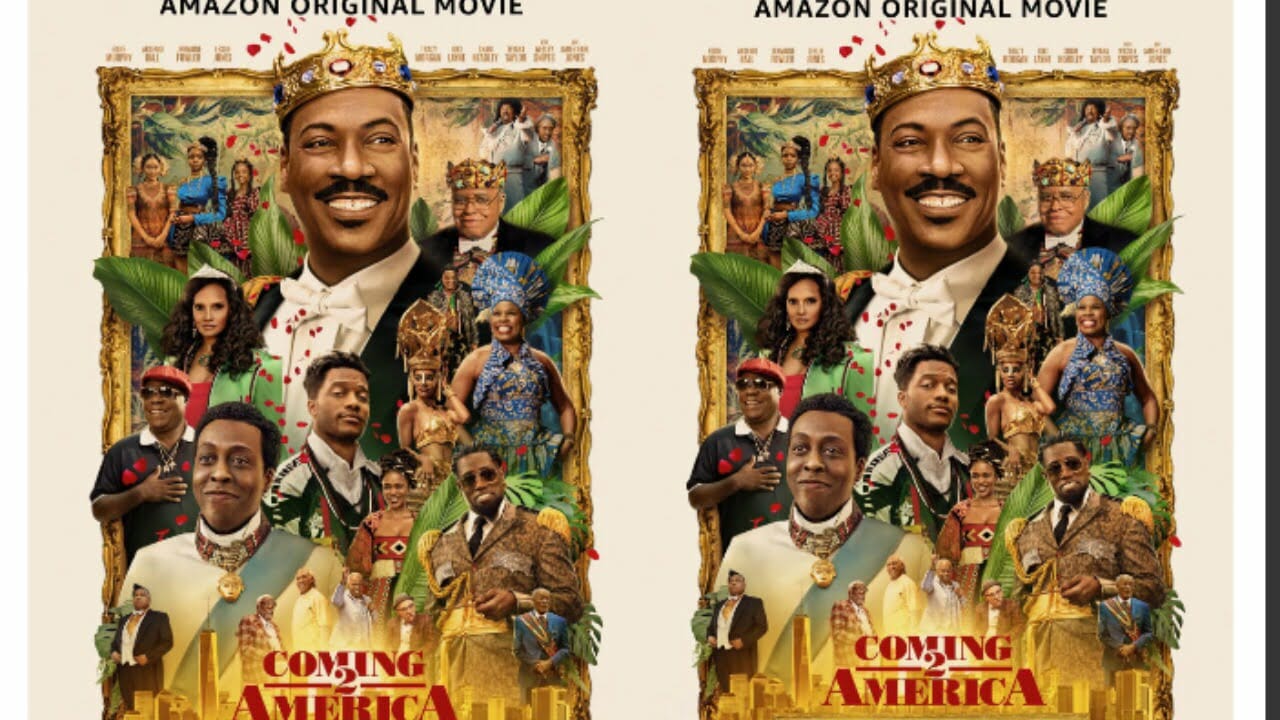 Finally!! After a long wait, the much-anticipated feature film, COMING 2 AMERICA, is out.

Kemi Filani News is among the first set of Nigerians to storm the cinema to have a feel of this great movie.

Despite, the brouhaha of Davido and Chioma’s breakup, the popular singer made Mama Ifeanyi proud as he performed live the song he had dedicated to her in the blockbuster Hollywood. We saw him excitedly screaming, ‘Chioma, my lover’.

Coming 2 America which was set in the lush and royal country of Zamunda, tells the story of newly crowned King Akeem (Eddie Murphy) and his trusted confidante Semmi (Arsenio Hall) as they both embark on an all-new hilarious adventure that has them traversing the globe from their great African nation to the borough of Queens, New York – where it all began.

Three decades and three beautiful daughters later, Akeem prepares to take over the reins of his homeland of Zamunda.

Gender roles are being challenged within his home, he is also faced with a new dilemma on the outside.

While tradition has always required a male heir to take the throne, Akeem feels torn between following custom and creating change.

While considering his eldest daughter, Meeka (KiKi Layne), who is the strongest choice, his rival, General Izzi (Wesley Snipes), is plotting a union of dynasties with his son, Idi (Rotimi), as Meeka’s groom.

Meanwhile, an ailing King Joffer delivers the shocking news that Akeem has a long-lost son, Lavelle (Jermaine Fowler), in Queens.

The son must be brought home to continue the long tradition of a male heir to the throne.

Upon the return of Lavelle to Zamunda, he had to face his biggest rivalry, Meeka who had been prepared all her life to lead her father’s people.

Apart from some sexist and racist words and actions, Coming 2 America is great.

And like its predecessor is heart felt, visually appetizing, and a different perspective of a magical love story.

The newer additions of Wesley Snipes and Leslies Jones both shine in very distinct roles, as well as the younger women cast as the Princesses as they are so beautiful and talented.

After Eddy Murphy’s awesome role interpretation, Welsey Snipes as General Izzi, was also the bomb! He is both intimidating and fun; with swagger and humour. His dedication to this individual really shows his versatility.

In terms of costume, Coming 2 America deserves an Oscar. This film has a very distinct feel to the original, they are both unique masterpieces. Every ornate placement of jewelry, and the crowns, gowns and capes, even the background cast are full decked out in contemporary African couture.

However, the love development between Javelle and his Royal Groomer (Nomzamo Mbatha) was rather too short. There wasn’t enough time for them to explore their chemistry. It happened to fast and looked unreal.

In conclusion, Coming 2 America (the sequel) is worth the 30 years wait. It helps enrich the black experience and celebrates continental heritage and culture. You would love to watch it all over again, especially seeing our super star, Davido performing live in the Hollywood movie.

Nigerians were fully represented as Tiwa Savage, and Burnaboy’s songs were both featured in the movie.

Nollywood actor and self-acclaimed gay seem to have turned a marriage counsellor.

The actor took to his Instagram page to advise...