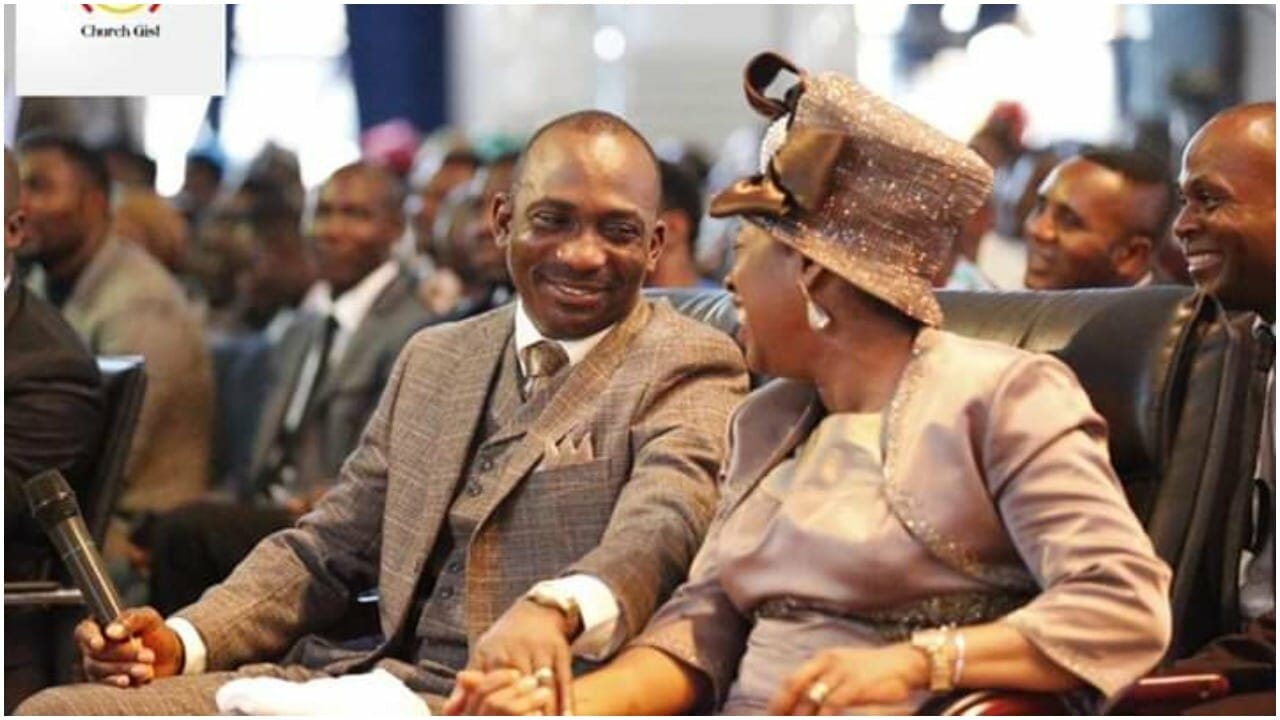 Dr Pastor Paul Enenche, the Senior Pastor of Dunamis International Gospel Centre has recounted the steps he tool after a colleague of his wife, Dr Becky Enenche made her cry.

Dr. Paul has made it clear on different occasions that he would not allow his wife be treated with disrespect.

It is on record that `while she was in active medical practice, Dr. Becky came home in tears one day after being verbally harassed by a colleague in the hospital. In his words, he drove to the hospital like the Biblical Jehu to confront the Doctor that upset his wife to the point of tears.

During his sermon on “Encountering God”, the Man of God said “When we came to Abuja newly, she was practicing medicine in a private hospital, she came home crying and I asked why ad she said a male colleague……I am at husband, I don’t make her cry, why will any man just come and make her cry? So, I carried Volvo like Jehu, drove like a man who was not marching brake…when i met the man, the man shook fist first, by the time i was through with him… I didn’t report him to nobody, I only Encountered him, he was sacked under 2 weeks….God is about to encounter an enemy on your behalf”

They were both members of the Executive Committee (EXCO) of the same fellowship on Campus.

Sister Becky (as she then was) had a horrible sight situation that made her unable to function without wearing her glasses. She only took off the glasses to shower and to sleep. Brother Paul (as he then was) prayed for her as a student and she was healed of the eye situation. She does not wear glasses till this day, and she comfortably reads tiny prints that Dr. Paul considers a distraction to read.

Brother Paul (as he then was) greatly admired Sister Becky’s passion as a young lady on fire for The Lord and prayed for her that she would not end up like other fiery, passionate ladies on campus who married men that reduced their fire. At this time they were not in courtship- they were just brethren.

'Why I suspended my wedding plans' –Harrysong

As a single man, Dr. Paul had a picture of his future marriage. He envisioned marriage to a woman who would stand shoulder to shoulder with him in ministry; drawing inspiration from Kenneth and Gloria Copelend as well as Tommy Lee and Daisy Osborn. Such is replicated in their marriage and ministry today.

During their courtship, Brother Paul (as he then was) laid hands on Sister Becky in impartation and as a result, the gifts of Interpretation of tongues and seeing clearly into the Spirit were activated in her.

Dr Paul and Dr. Becky almost always wear at least the same colour of clothes. It is on record that on a day they were billed to go out and she appeared in a different colour from him, he questioned her choice of colour and she told him that she did not have the shade he was wearing in her wardrobe. To right the wrong, he wrote her a cheque of a sum of money that would buy 10 (ten) different clothes in that colour shade.

Store owners and traders at the Timber Market in the Marine Base axis of Port Harcourt, Rivers State, woke up to see their stock gutted by a...

‘Yemi Alade, a village girl’ singer Dencia labels her colleague on social media
Despite outcry, BBNaija’s Ka3na continues to blast fan who tattooed her name for attempting suicide
To Top