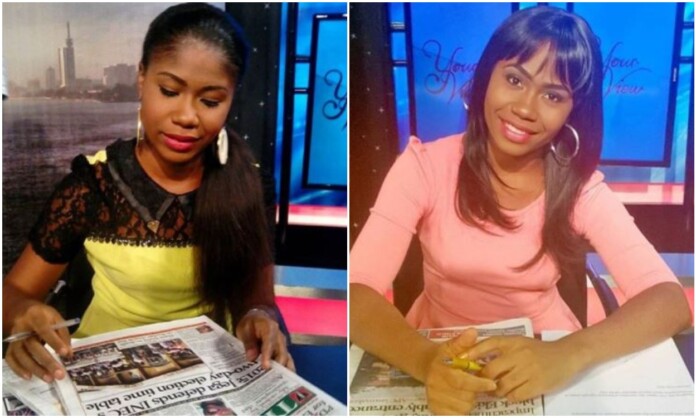 Popular broadcast journalist, Sandra Eze fondly called Sanzye has in a series of threads on Instagram revealed why she left the show abruptly in September 2015.

According to Sandra, she was suspended indefinitely from Television Continental based on orders from Bourdillon.

It has been rumoured that Tinubu owns the TV station which is situated in the Ikosi, Ketu area of Lagos State.

Sandra who co-hosted the popular breakfast show participated in the ongoing nationwide #EndSARS protest said, the protest taught her something which made her question why she has been silent about her exit from the show. Telling the whole true about her exit, the broadcaster wrote;

“No, I did not leave #YourViewTVC because I was disciplined and I couldn’t take it. I did not leave because I had attitude issues, or I was headstrong and refusing to take advice (really? Wow.) Nor did I leave because I wanted to focus solely on acting. Your View had a very flexible schedule… that was a cover up.
“I walked out during a live show, a call came from Bourdillon and asked that I be suspended indefinitely. That’s the summary.”

The broadcaster who revealed, she was hired by Morayo Afolabi-Brown, was the lead anchor at the time Afolabi-Brown gave birth and began maternity leave. She said on a particular day, when the discussion on the threat by the Lagos monarch came up on the show, things got heated.

The journalist added, “The Oba of Lagos made an inciting statement about drowning Igbos in the lagoon (some of you might remember it). The next day, it was the headline in almost all the dailies. At this point, Debisi wasn’t the producer anymore, Emem was. I believe she could have switched me given how sensitive the topic was and considering that this concerned a people I represented.”

“During makeup, she asked me to ensure I said nothing about it, just ignore the story. I wasn’t ok, but well, I don’t want to be the person who tells my producer no. So we went live. Intro, banter, paper review, hot topic, let’s talk…I said nothing about it, we were almost there. 9:50am, a guy called Hassan calls in and drags us back to paper review on what the Oba said, his comments hurt,… I waited for Morayo to cut him, it was taking forever.”
Eze said she tried to keep her cool so as not to act in a way that would attract sanctions from the National Broadcasting Commission.
She said she decided to walk out during the live show and had hoped that her co-hosts would cover up for her.

The broadcaster said Afolabi-Brown tried to calm her down and advised her to apologise to the TVC management but it seemed this was not enough.
Eze added, “I went home, locked myself and cried. Then I rehearsed my apology and showed up to work the next morning. I walked into the makeup room, greeted Morayo but it felt different. I felt tension, she said “Sanzye can I see you”… my heart broke. Sure, I said.
“She said ‘…I was instructed that a call came from Bourdillon and they don’t want to see you on the show again… so you’ve been suspended indefinitely, just chill small, lemme talk to them’”.
The broadcaster said she made frantic efforts to save her job and even visited Bourdillon twice but it was all for nothing.
She said things soon went downhill as her finances suffered.
Eze, however, said God was able to rescue her from her desperate state and help her become the actress that she is today.
The broadcaster added, “Why would someone sit in Bourdillon (as I was told) and play my life, my career, my emotions like badminton? I may not know anyone in high places but I am a respectful young woman and I will be respected.
“I waved the show goodbye and patiently waited for my face to leave that montage. Seeing my face on that tune made me sick. It took a painful long wait but a new montage was made and I rested. It was official. Goodbye Your View and TVC. I took my time because I wanted to be sure I had flushed yesterday’s anger.”