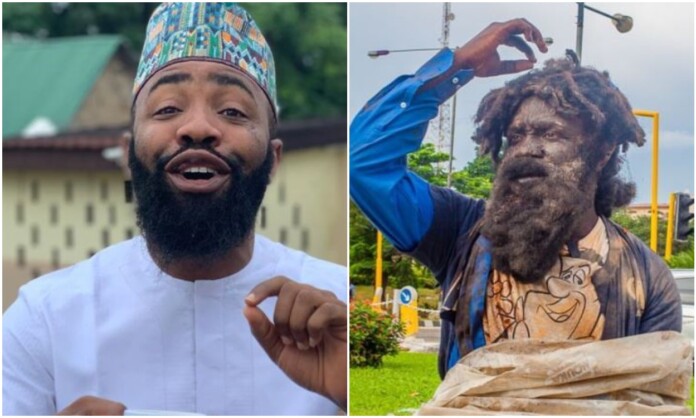 Popular Comedian, Woli Arole has stormed the street of Lagos dressed like a mentally disorder man in celebration of #WorldMentalHealth Day.

According to the comedian, who revealed some Nigerians gave him money, while some others chased him away, some nearly slapped him.

”A lot of people are going through “Mental stress”, some people look like it, some don’t look like it. Some are mentally challenged, some are mentally ill. “Mental Health” is a State of emotional, psychological and social well being and it should be taken seriously. Celebrating the #worldmentalhealth2020 today!!!!!

I went on the street of Lagos dressed like a “Mentally ill” person, I saw the reaction of a lot of people, some people gave me money, some ran away from me, a guy nearly slapped me, then I realized that a lot of people look down on the “Mentally challenged” in the society, which is not too good there’s more we can collectively do in love. Our psychiatrist hospitals should be looked more into by the government. Some people are not even dressed like this physically, they look good and okay but they are going through “Mental illness” which includes Clinical depression, Anxiety disorder and Bipolar disorder and a whole lots. Please let’s take our “Mental State” seriously. Celebrating #worldmentalhealth2020

READ
Nollywood actor, Yul Edochie talks about where he does money rituals |Details

If you saw a “MENTALLY iLL” person around Shoprite yesterday, stopping cars, begging for alms, begging for food. That was “WOLI AROLE”. I am the image of a lot of people “Mental State”. Some people get dressed looking nice and go to work, some people look so beautiful but are “Mentally Unstable” This was just my own way of advocating, sensitizing and creating awareness for “Mental Health”. Celebrating #worldmentalhealth2020. A man nearly hit with his car, I ran �.”