A pastor identified as Sunday Edino has been arrested by the Kogi State Police Command, on Monday 26th of October, for allegedly...
Read more
Home Metro Mother tries to sell her 1 week old baby to buy a...
Facebook
Twitter
Pinterest
WhatsApp 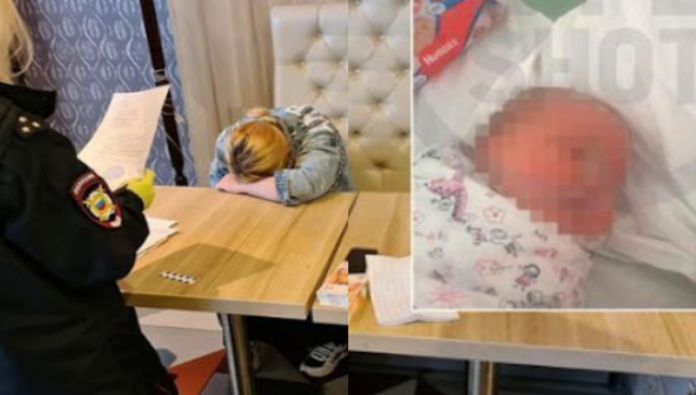 A mother has shocked many by trying to sell her 1 week old baby to buy a pair of shoes.

The heartless mum tried to sell her newborn baby for £3,000 to treat herself to a new pair of boots.

Luiza Gadzhieva, 25, was detained in Moscow, Russia, for attempting to sell her newborn baby on the black market.

She advertised her tiny daughter saying she was seeking adoptive parents and accepted £3,000 for the child.

But the mother, who has three other children, was caught in a sting operation with law enforcement posing as the buyers.

Earlier, Gadzhieva discussed with her sister how she had chosen a new pair of boots to buy once she sold the baby, it was revealed.

She handed over the baby girl in a city coffee shop from “mercenary motives.”

A law enforcement video shows Gadzhieva hiding her head in shame as she was quizzed by detectives.

Before police stepped in, anti-slavery group Alternativa met the woman and sought to persuade her not to sell the one-week old baby.

Posing as potential buyers, the group said: “We tried in every possible way to explain to her that bad, dangerous conditions awaited the child.

“We warned that the baby would be handed over to gypsies, but she was little interested in what would happen [to her daughter].

“The height of cynicism was her correspondence with her sister, who knew about everything, and in which the child’s mother discussed what boots she will buy for herself after selling the baby.”

Gadzhieva, from Dagestan region, had appeared unconcerned that her child could fall into the hands of criminals, according to Alternativa.

A group spokesperson said: “It is not known what would have happened to this child.”

Apart from boots, she told one prospective buyer she also wanted to use the cash for a deposit on a house.

In a statement, the Russian Investigate Committee said: “After receiving the money, she handed the child over to the customer and wrote a receipt.

“During the interrogation, the woman pleaded guilty in full and was charged.

“Currently the child’s life is not in danger. The criminal investigation continues.”

The baby was taken into care.