Following the tension generated after hoodlums and criminals hijacked the #ENDSARS Protests, President Muhammadu Buhari has given a marching order to members...
Read more
News

A photo of a major Nigerian Newspapers advertising people who pledged their support for the national leader of the All Progressives Congress,...
Read more
News 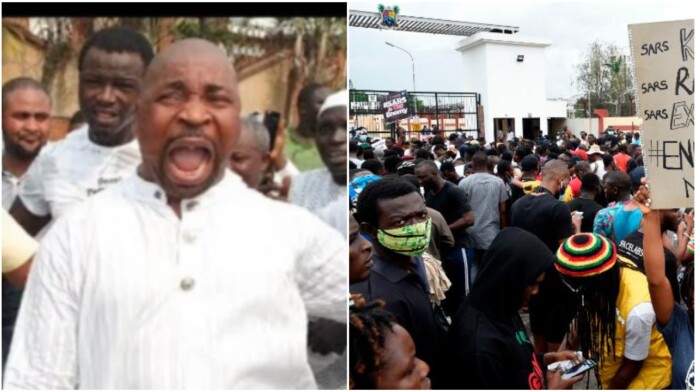 Earlier today, many #EndSARS protesters at the Lagos State House of Assembly rejected refreshments sent by the Chairman of the National Union of the Road Transport Workers in the state, Musiliu Akinsanya aka MC Oluomo.

Kemi Filani News reports that the refreshments (food and drinks) were conveyed in a white van to the Alausa area on Friday afternoon.

The NURTW boss reportedly sent food as well as soft drinks and water branded with his name to the youths to pacify them following the attack unleashed on the protesters by thugs at Ikeja, the state capital, on Thursday.

Kemi Filani News recalls that MC Oluomo was accused of sponsoring the attack but he vehemently denied it.

“I didn’t sponsor attack on #EndSARS protesters. I Alhaji Musiliu Akinsanya (aka MC Oluomo) know nothing about the allegations that trend on social media that I sponsored attacks on #EndSARS protesters at Alausa today 15th October 2020.
I wondered why people will link the event in Alausa with me . “I was surprised when my aides brought it to my attention what people were tweeting on the issue.” he denied.

Despite the denial, many refused to believe him and thus rejected the refreshments on seeing that the packs were branded with ‘Donated by MC Oluomo’.

The protesters pelted the van with empty plastic bottles, alleging that the NURTW boss had sent them “poison”.

The driver of the van zoomed off immediately.

For over a week, youths across the state who joined their counterparts from different parts of the country, have been demanding a total overhaul of the Nigeria Police Force and an end to extrajudicial killings by men of the defunct Special Anti-Robbery Squad.