The ongoing nationwide Senior Secondary Certificate Examinations has been suspended indefinitely by the National Examinations Council following the current unrest in the...
Read more
News

The National Leader of the All Progressives Congress (APC), Asiwaju Bola Tinubu, has commiserated with the people of Lagos and the State...
Read more
Home News #EndSARS: Sanwo-Olu to compensate victims with over N200m
Facebook
Twitter
Pinterest
WhatsApp 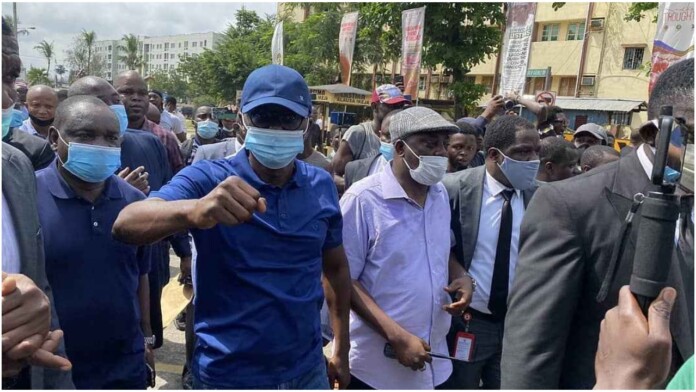 The Lagos State Governor, Sanwo- Olu has on Tuesday revealed that a N200 million fund has been set up to compensate families of victims of Special Anti-Robbery Squad (SARS) killings.

Sanwo-Olu made this announcement while speaking at the EndSARS protesters at the Lagos House of Assembly gate, Alausa, Ikeja.

According to the governor, the compensation fund will be completely managed by Civil Society Organisations (CSOs) appointed by members of the public.

Sanwo-Olu urged the protesters to send the list of everyone that had fatal encounters with SARS in Lagos.
He stated that the government would distinguish the families and ensure that they were truly compensated.
The governor said that he fully identified with the EndSARS struggle, knowing that many youths had been battered, and he felt their pain.

Sanwo-Olu further pledged to convey the requests of the protesters to President Muhammadu Buhari, some of which are increment in police salary, as well as Justice for those killed by the Police.