The Inspector-General of Police, Mohammed Adamu, has told officers what to do when they are faced with any sort of physical attack...
Read more
Home News #Endsars protesters shun Wike’s order, storm Port Harcourt streets |video
Facebook
Twitter
Pinterest
WhatsApp 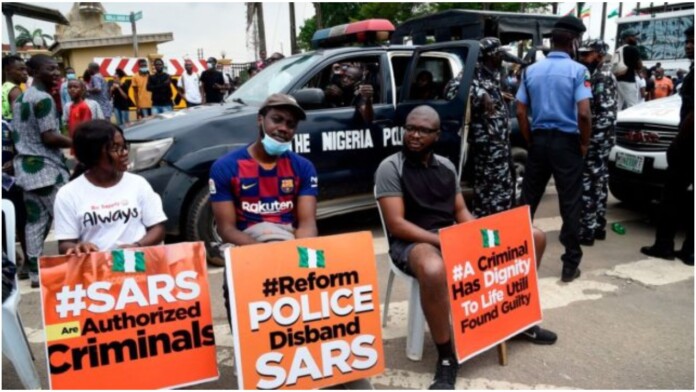 Rivers state residents, on Tuesday opposed the order of Governor Nyesom Wike, banning them from embarking on the ongoing nationwide #ENDSARS protest.

Despite the ban, thousands of youths were seen on the streets of Port-Harcourt, campaigning aggressively against police brutality, extortion and gross human rights abuse.

Kemi Filani News recalls that the Governor of Rivers state, Wike, last night banned all forms of protest throughout the state.

The governor made this announcement via his verified Twitter handle. He wrote;

“The Rivers State Government hereby [wishes] to inform the general public that all forms of protests have been banned throughout the State.

“Therefore, all proposed protests under #EndSARS Campaign are hereby prohibited.

“Government took this decision because the Inspector General of Police, Mohammed Adamu, had already scrapped the Special Anti-Robbery Squad. Therefore, there is no need for any form of protest against a Unit of the Police Force that no longer exists. “Parents and Guardians are therefore advised to ensure that their children or wards do not violate this order.

“Law enforcement agencies are also directed to ensure that the ban is enforced and that violators are brought to book.” He tweeted.

Triggered by this, Rivers state residents stormed the streets, demanding an end to Police brutality, assault and other misdemeanours.

One of the protesters identified as Ébi Wali, said: “The hot blood that runs in Wike, runs in every port Harcourt breed, We are very stubborn. We’d rather die in the fields than die sleeping. Intimidation is our enemy. #SarsMustGoNow”.